LuLu Group International has appointed Design International and Eng. Adnan Saffarini as the Architects of Avenues Mall, Silicon Oasis – the Group’s new flagship mall in Dubai. Avenues Mall, Silicon Oasis will become the new gate to the 7.2 square kilometers ‘Dubai Silicon Oasis’, a smart city with world class facilities that is home to over 700 high tech companies, institutes, hotels, business parks and large residential communities, located right off Emirates Road and Al Ain Road in one of the fastest growing part of Dubai.

The master mind of Dubai Silicon Oasis is Dubai Silicon Oasis Authority, a company established in 2004 and wholly owned by the Government of Dubai. It will be the first smart city of Dubai, providing both living and working integrated communities at the very lowest energy consumption per capita, located just 12 minutes’ drive from Downtown Dubai and 15 minutes’ drive to Dubai International Airport.

Mr Yusuff Ali M.A., Managing Director of LuLu Group International, owner of one of the fastest growing retail real estate corporations in the Middle East and Davide Padoa, Architect and CEO of Design International, one of the most innovative architectural firms with offices worldwide, together with Engineer Adnan Saffarini have presented the iconic Avenues Mall, Silicon Oasis project to Dr. Mohammed Al Zarooni, Vice-Chairman and CEO of Dubai Silicon Oasis Authority.

“All the Parties involved in this project share the same values: the development of the community, as well as the desire to be at the forefront of style, technology and sustainable innovation, which is what Dubai Silicon Oasis stands out for.”

The revolutionary design of Avenues Mall, Silicon Oasis is composed by five gigantic shape-alike pebbles. Inspired by ancient Arabian movements across the desert, Design International wanted to offer both a strong architectural statement and an imposing gate into an oasis of calm and tranquility in the otherwise hectic pace of modern suburban Dubai. Inside, the mall features nature at its most exquisite values, with five plazas that resemble the five elements of an oasis: The Cave, The Canyon, The Forest, The Lagoon and The Mirage.

The mall also has separate zones; Entertainment, Urban Fashion, Luxury, Kids and Sports, Leisure with Cinema, FEC, over 45 restaurants and of course a flagship LuLu Hypermarket and LuLu Department Store. The retail offering will be on two levels, with a total GLA of 72,621m², a GFA of 104,036m² and 3600 car park spaces over 2 basement levels. Mr Padoa continued:

“Every project has its story; each is unique. Avenues Mall Silicon Oasis has five dimensions. On top of the conventional three, it will have a fifth façade on its roof, accessible by the public, and it is a mall that works with your senses: it will set a new trend in food and beverage with integrated cooking classes, food events and gourmet clusters that will work benefiting from LuLu’s Hypermarket food-chain. The project will feature also the first Imax theatre, as well as one of the largest fitness and wellness centers in the Emirates.” 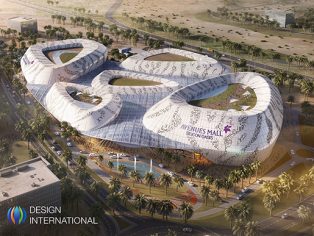