Gary Bundy, technical director of Sto, considers the impact of the ever-present threat of terrorist attack on the use of glass in the design of public spaces

It is hardly a secret that the UK is facing an ongoing threat of terrorist attacks: the attacks on London’s transport infrastructure in 2005 and the subsequent abortive car bomb attack on Glasgow Airport in 2007 provided chilling evidence of the tactics likely to be employed by groups wishing to cause maximum impact.

While UK security services focus on minimising risk as far as possible, it is also recognised that the people who design the environment in which we live and work need also to make a contribution to alleviate, as far as possible, the impact of any attack.

The UK government recognised this as long ago as 1996 when it published its Aviation Security in Airport Development (ASIAD) document, focusing on how the design of airport buildings can contribute to reducing the damage and injury caused by terrorist attacks.

Today, major developments to the UK transport system are taking place within the rail network, with the high-speed rail link currently being planned and the Crossrail project under construction in and around London.

The challenge for designers of these key public spaces is how to combine the need to provide a safe environment with the ambition to design welcoming and visually interesting public spaces.

This challenge is encapsulated in the debate over the use of glass in key transport hubs. The major threat being considered is that of an improvised explosive device (IED). These range from small devices that can be carried in a rucksack or holdall to car bombs.

The physical effect of a blast is described in detail in the government’s 2012 Security in Design of Stations (SIDOS) Guide, which brought together the expertise of the Centre for the Protection of National Infrastructure, Department of Transport and the British Transport Police.

The detonation of an IED causes an instantaneous release of energy, creating a blast wave and heat. The effects of the blast wave can be felt as positive pressure, which carries destructive power out from the seat of the explosion, followed by negative pressure.

The blast wave itself can cause death and injury, but it is the secondary fragmentation from the structure of the building itself that should also be a focus for building designers. Building collapse and glazing fragments are the main cause of trauma injuries in attacks involving explosive devices.

Most discussion on the use of glass in buildings has focussed on its use in windows, doors and shopfronts. However, more recently, the popularity of glass as a facade material has required product manufacturers to develop solutions that allow such systems to comply with current safety standards.

In relation to bomb blasts, there are three separate design issues: the type of glass and its behaviour under blast conditions; the stability of the attachment of the glass to its fixings and the security of the mechanism used to fix the whole facade system to the building fabric.

The relevant standard here is ISO 16933:2007 – Glass in Building – Explosion-resistant security glazing. This is a procedure for determining the air-blast resistance of glazing, remembering that the majority of injuries are caused by glass fragments that are pulled away in the negative blast force that follows an explosion. The standard blasts in the test simulate both vehicle bombs and smaller satchel bombs.

Until recently there have been very few glazing systems able to meet the more stringent levels of this demanding standard, meaning that designers have been limited in their ability to specify glass systems in transport hubs. However, this situation is changing.

The UK is the location for one of the world’s leading facilities for testing the effects of blast and high explosives at Spadeadam in Cumbria and leading rainscreen cladding systems have undergone testing. The idea of the test is to simulate a 100kg explosive – essentially a car bomb – at 15m range. The system is considered effective if no large glass fragments are released by the blast to cause injury.

This is often achieved by a construction that comprises 6mm of toughened glass bonded to a carrier board, giving a panel that is 30mm thick. This composite panel is then fixed to the building structure with a stainless steel/aluminium support system.

If a decorative glass facade system is able to satisfactorily cope with the ISO 16933 tests then it should be considered appropriate for use in public areas considered at risk of attack. This allows designers to access the myriad of colours and effects possible with fully glazed facade structures: ensuring that, in this area at least, creative design does not have to be compromised in order to provide a safe environment. 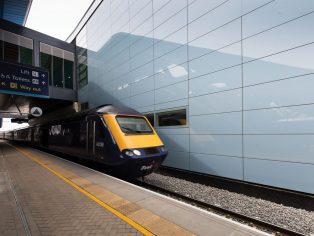 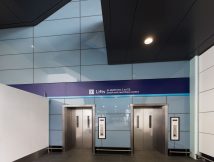