Flat roofing specialist Bauder was recognised at this year’s UK Roofing Awards, winning two of the prizes on offer for its work on Byker Wall in Newcastle and ROM’s manufacturing facility in Sheffield. The award winners were announced on May 13th at the Hilton Metropole in London, an event hosted by TV presenter Steph McGovern and overseen by the voice of the National Lottery Alan Dedicoat.

Now in its eleventh year, the Roofing Awards are an industry-wide competition that celebrates outstanding standards of workmanship and safety within the roofing industry. This year the level of competition was particularly high with almost 300 project entries being submitted for the fourteen award categories available. A wide range of criteria are taken into consideration by the judging panel when determining category winners including: degree of difficulty, aesthetics, problem-solving and environmental qualities.

Bauder’s first win of the night came for its photovoltaic (PV) installation at the landmark, Grade II listed Byker Wall estate, which won the ‘Solar on Roofs’ category. As part of the £26 million refurbishment of the residential properties, work was required to not only repair the failing roof but to also bring Byker Wall to the forefront of modern-day roofing technology with the addition of a photovoltaic system. The works included converting the pitched metal roof back to its original flat roof status and replacing the waterproofing with Bauder’s high quality reinforced bitumen system, which was expertly installed by Hodgson Sayers. Four of the ten housing blocks were then fitted with 132 state-of-the-art PV Modules, enabling Byker Wall to generate at least 39.6 megawatt-hours of solar power each year.

Following on from this success, ROM Ltd was then chosen as the winning project for the ‘Reinforced Bitumen Membranes’ category from a group of four finalists that included two other Bauder projects. The phased roof refurbishment at the manufacturing facility involved replacing the failing waterproofing with over 9,250m2 of Bauder’s premium bituminous system, BTRS, which was installed by Mitie Tilley Roofing. The project had various health and safety implications, with the main-substructure proving unstable due to corrosion and the facility remaining operational throughout the works, however all remedial work was completed on time and to budget much to the delight of the client.

Bauder’s Managing Director, Andrew Mackenzie, expressed his delight with the company’s success at the awards ceremony,

“Bauder is always delighted to be recognised by the Roofing Awards, which serve as an industry benchmark for quality and best practice. Byker Wall and ROM’s manufacturing facility illustrate the exceptional levels of workmanship that our approved contractors deliver and we are extremely proud of the work that has been performed by everyone involved with these projects.” 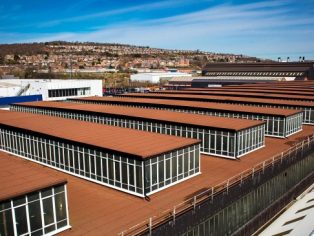