Kent businesses are feeling the benefit of the changes being made at The Duke of York’s Royal Military School in Dover, it has been revealed.

The suite of upgrades to the School, being undertaken by contractor BAM, has generated over £19.5m in orders for firms based around the region – over three quarters of all the orders generated.

Orders based inside the county include scaffolding, demolition, roofing, brickwork, the timber frame, architectural metalwork, carpentry, tree surgery and other trades. The largest single order, around £5million worth of mechanical and electrical works, was placed with Canterbury-based contractor Halsion Ltd.

To date, the project has inducted over 1017 men and women to work on site, with over 75% of the workforce coming from within 50 miles.

“It is part of BAM’s philosophy of construction that we try to give back to the communities around our projects, because construction can have a valuable regenerative effect in employment, skills and orders for local businesses.

“I’m pleased that Kent has got so much from our work here, and it’s good for the school too. We’ve had to work on a large number of buildings, and it’s been a testing logistical challenge, but we are on schedule and on budget, and have formed a strong partnership both with the School and Kent County Council.”

For Mr Brenchley, the warm words about giving back carry a special meaning, because his career – initially as a design manager before becoming a project manager – is a tour around the county.

“I grew up in Broadstairs, and now live in Maidstone and I’ve worked in Canterbury, Folkestone, Gravesend, Dartford and Tonbridge.

“I have worked for BAM for ten years and the Duke of York’s Military School has been a tough challenge, managing over 100 staff each day, spread over five construction projects on this large site. The School has so much history dating back to 1803 in Chelsea, London before moving to the Dover site in 1908. It is an iconic site and has resonance with many locals as they can view the clock tower for miles around and the neighbouring Dover Castle.”

“As a full boarding School with students living here 24 hours a day, 7 days a week during term time, this has been a complex project for the School to undertake. More families in Kent are choosing us for their children’s secondary education and we are pleased that so much has been given back to the local economy because of the School’s major works. We look forward to showing our visitors the great transformation of the estate here when the building work and landscaping is completed later in the year.” 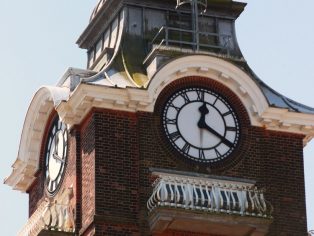