The Ardler Complex, a council-run facility in the northern suburbs of Dundee, first opened in 1975 and features two squash courts, a games hall with spectator gallery, dance studio, cardiovascular fitness and weights room. Periodic upgrades have improved parts of the facility; however, the showering and changing area received its first upgrade since 1975 in early 2014. The main catalyst for this long overdue improvement was Ardler’s hosting of a new National Body-Building competition – an open event for competitors from all over the UK. The inaugural event, in April 2013, attracted over 60 male and female competitors and around 500 spectators. Despite the rather embarrassing state of the showering and changing areas, the event was hailed a great success. However, aspirations to establish this event as an annual fixture have driven this fantastic upgrade that also benefits the local community.

The design brief was to create a facility that would make a strong statement and serve as the council’s ‘Flagship’ community venue. Strong supporters of Horne thermostatic showers and mixers, Dundee City Council was a high priority when it came to Horne’s unveiling of their new shower column design, the Duŝo (pronounced Doosho, it means ‘shower’ in the constructed language of Esperanto). Ron Hutchison, Horne’s Sales Engineer for Scotland, pinged over the newly-completed animated product tour to his contacts at Architectural Services and followed this up shortly afterwards with a full product demonstration. Craig Nicholson, tasked with the design for Ardler and a number of other community venues, was very taken with the aesthetics of the Duŝo, feeling it was very appropriate for the statement all hoped to make. The Duŝo is a slender and visually striking shower column for group showering applications where a number of columns are supplied with pre-blended water from a single upstream thermostatic mixing valve (TMV). An actuator paddle at the foot of the Duŝo column operates a hydraulic timed flow mechanism that gives a generous 60 second duration as standard. There was immediate buy-in from Ardler’s local management group for the Duŝo: its modern, attractive looks and flow duration.

“I like its narrow shape and swan neck – it’s really nice!”

Ardler’s local management group is delighted with the new installation that features 6 and 4 Duŝo facing each other in the gent’s ‘wet room’ and a single range of Duŝo separated by privacy cubicles, including one wheelchair accessible, for the ladies.

Scott Rodgers said of the installation:

“It’s absolutely brilliant. The showers look really smart and are now in-keeping with the rest of the facility”.

The Duŝo design is practical and versatile: the spray plate and actuator paddle are available in 4 colour options – for aesthetic or practical purposes. Water saving features and ease of installation and maintenance ensure lowest lifetime costs.

More information, including a narrated animated product tour, at http://www.horne.co.uk/products/duso/.

The second Ardler Open took place in early April 2014 and, following its resounding success, is set to become a staple in the body-building competition calendar. 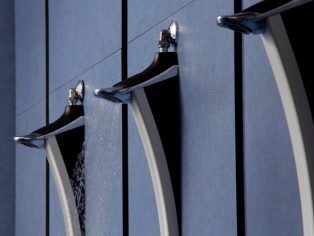