Eight Artillery Row was presented with the BDA Chairman’s Award at the 2015 Brick Awards in November. Designed by Make Architects for clients Victoria Property Holdings and LBS Properties, this competition-winning design proposed the refurbishment and extension of an existing 1980s office building in Victoria to provide twenty two private residential apartments over eight levels, plus ground floor retail space.

With an area of 3,000m² the project brief consisted of retaining and reconfiguring part of the original building fabric, with judges’ comments stating:

“With inaccuracies in the basic frame of the building, the brickwork had to be meticulous, and the new brick façade makes a really positive contribution to the street scene.”

The clay material consisted of a Charnwood bespoke brick blend, to draw from the fine examples of historic buildings within the nearby Westminster Cathedral Conservation Area. Judges continued:

“The careful attention to detail has produced a sustainable building, and with many brick specials incorporated in complex elevations it provides an incredibly successful response to a demanding design. This building exemplifies the kind of refurbishment project that we need if we are to regenerate our inner cities areas in a sustainable way and create the kind of environments which people value and where they want to live.”

“From our first meeting with Make Architects it was clear that this job would become an award winning project. It wasn’t without its challenges, the prefabricated off site torpedo wind posts, soffit panels, heads and sills were fabricated in two different off site locations, meaning component location for assembly was also demanding.”

“Charnwood’s team also had a task producing complex and accurate special brick products. However, three years later, after fully project managing the bricks/specials and prefabricated brick supply, we were delighted that the scheme had been rewarded with an acclaimed Brick Award.”

“We were delighted with the care and attention of MBH PLC’s craftsmen in making these precise brick products. The speed and quality of this service was reinforced by the manufacturer’s engagement with Make, supplying numerous samples in order to deliver the Architect’s vision.”

The Brick Development Association’s newly appointed Chairman, Michael Ankers OBE, presented the Brick Award to the proud team at Make Architects on the 18th of November in London.

The building is situated in a prime corner site which enjoys one of the most enviable locations in London. The highly sustainable design strips the existing building back to its primary structure and replaces the shell and roof with a robust, simple form that ties in sensitively to the local context whilst installing a highly insulated façade.

Re-introducing the historic curved corner was an integral part of the design which now includes an elegant contemporary clock that doubles up as a window. This design proves to be a successful interpretation of residential development and leads the way for refurbishment of our cities. 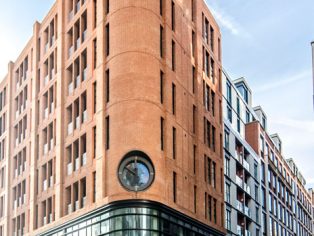