Grosvenor Britain & Ireland (‘Grosvenor’) announces that it has completed the £5 million restoration of the Grade 1 listed St. Mark’s in Mayfair, London.

Built in 1822, St Mark’s was listed as a Grade 1 property in 1958 and placed on Historic England’s Buildings at Risk Register in 1989. It was also known as the ‘American Church’ given its proximity to the former US Embassy and President Eisenhower and Eleanor Roosevelt are known to have attended services there.

Following the Second World War, the congregation dwindled to the point that the church was deconsecrated by the Church of England in 1974. Numerous attempts have been made to revive St Mark’s through proposals for alternative uses. However, none were successful in securing a long-term use for the building which were sympathetic to is character and which would enable the major restoration works required to be carried out.

In 2014, Grosvenor’s proposals to transform the building into a retail and dining destination and community hub were approved. Importantly, the plans were both sensitive to the historic fabric and significance of the former church and would allow it to be fully opened up to the public after decades in private ownership.

Grosvenor has repaired and restored the building’s historic features including the front portico, chancel altar and reredos, the font and its surrounding paintings and panels. The bell tower has been restored to enable the one tonne bell to ring for the first time in over 40 years. The stained glass windows, damaged crypt and basement chapel also benefitted from extensive repairs.

“This has been an exciting opportunity for us to use our experience in restoring architecturally and historically significant buildings to open up much needed new public and community space right in the heart of London’s West End.”

“Our investment in St. Mark’s is an illustration of our wider vision for Mayfair, making it more open, enticing and accessible for those who visit, live and work in the West End. We are delighted to have breathed new life into this outstanding heritage asset and that its architecture, charm and grandeur can be enjoyed by the public once again.”

Grosvenor has a 20 year vision to transform its London estate to help tackle the pressures facing the capital. With London’s rapid growth, this strategy will see Mayfair and Belgravia be more active, more open and more integrated, working harder for the city. In the next 10 years Grosvenor will invest £1 billion in future proofing its estate to help it meet the challenges of population growth and to deliver the vision.

“We will continue to invest across our London estate to protect and promote its heritage and distinct character but also to ensure it is prepared for the challenges of the future.”

The company is in discussions with an operator for the retail and dining space and will make an announcement in due course. A free to use community space will also be open in the crypt for local residents and groups from summer 2018.

The History of St. Mark’s
Built in 1822, the Greek Revival building was expanded and remodelled in a neo-Romanesque style in the Victorian era by celebrated English ecclesiastical architect Sir Arthur Blomfield to accommodate new congregations for London’s rapidly growing population.

In recognition of its historic and architectural significance, St Mark’s was listed as a Grade 1 building in 1958. Despite its prominence, the local population dwindled after the Second World War to the point that the Church of England decided to deconsecrate St Mark’s in 1974. It was placed on placed on Historic England’s Buildings at Risk Register in 1989. 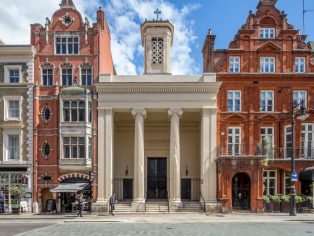