Endo Shuhei: Paramodern Architecture 25/25 is the renowned Japanese architect’s first solo exhibition in the UK, showcasing 25 models from a selection of Endo’s work, as well as marking and celebrating the 25th anniversary of the establishment of his studio, the Endo Shuhei Architect Institute.

The architectural models crystalise Endo’s ideas, each one functioning like a Zen riddle, poised to become something more, or something else, once the riddle is solved. Economical yet beautiful, these models are imbued with restless energy and deeper layers of meaning.

Those already familiar with Endo’s work will know that he has preferences for certain types of material, such as industrial corrugated steel, which would be deftly bent, rolled and folded, corroborating the bold style that his buildings have come to be known for. All his projects also have the suffix ‘–tecture,’ as in Bubbletecture, Halftecture, Rooftecture, etc., and such a systematic and consistent approach mirrors the rigour Endo employs for designing buildings.

The singular, determined focus that Endo has retained over the years is something that the Japanese architectural historian Hiroyuki Suzuki has noted before. Nevertheless, the way Endo twists and rolls the ’skin’ of his buildings allows for a structure that is never fully enclosed.

Interestingly, despite the shared quality of openness, which is indeed also found in traditional architecture in Japan, Endo’s buildings have not much in common otherwise with the lightness of Toyo Ito’s work or the delicateness of SANAA’s work. Having lived through the Great Hanshin Earthquake of 1997, Endo is aware that modern buildings in Japan must be robust and serve to protect people from natural disasters rather than become further cause for casualties. This calls for careful planning. Ascetic appearance of his work is derived from his belief that social responsibility is implicit in architecture.

The exhibition Paramodern Architecture 25/25 is part of the London Festival of Architecture 2015 and will be on display at TOTO Gallery, London from 24 June to 14 July 2015 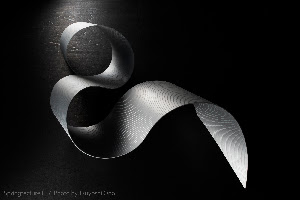