Eric Wright Construction has completed a 39-week project to establish a creative arts and media building at Carlisle College.

Comprising a 128-seater performance theatre, dance studio, rehearsal spaces, an Apple Mac lab and art studio, the project has been erected on a site formerly known as Swift Mews.

The scheme was designed by Broadway Maylan and the construction works included the provision of new build accommodation, as well as the retention of an existing building façade classed as being of historical interest by the local planning authority.

Carlisle College celebrates its 60th anniversary this year (2014) and has invested around £30m into its campus during the last decade.

Previously, the college’s arts-based courses operated on a campus shared with the University of Cumbria at Brampton Road, Carlisle.

“This is a visually attractive building that will inspire and encourage the performers, artists, musicians, back-stage workers and technicians of the future.”

“Even though we have extensive experience in the education sector, it’s always nice to work on something unique and it was a pleasure to deliver this project for the young people of Carlisle and beyond.”

“The new home for Carlisle College of the Arts is designed to ensure that our students get the best possible learning experience and achieve their goals.”

“We are delighted to see students move into their new arts facilities. It signifies an important landmark in the continued development of the college in what is our diamond anniversary year.” 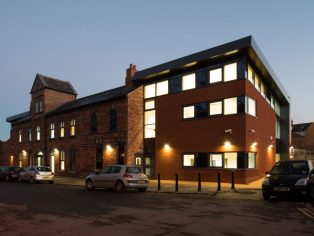