Ettore Sottsass and the Poetry of Things by Deyan Sudjic

Ettore Sottsass and the Poetry of Things by Deyan Sudjic, Director of the Design Museum, is the life story of one of the 20th century’s most important designers. Ettore Sottsass (1917-2007) is best known for his design of the Olivetti Valentine typewriter and as founder of Memphis, the Eighties international design collective. This book, published by Phaidon in September, encompasses the story of 20th-century design and the social and political history of Italy told through the life of one man.

The book includes personal anecdotes from throughout Sottsass’ career as a designer, architect, photographer, writer and editor. Sottsass filed every letter that he received, and some he sent. He kept negatives of every photograph he took, books, military papers and drawings, from his childhood scribbles from 1924 to the sketchbooks that he used almost every day until he died on the last day of 2007. Ettore Sottsass and the Poetry of Things has been shaped by conversations with designers Aldo Rossi, Shiro Kuramata and Sottsass himself. It includes details of his encounters with the likes of Picasso and Alice B. Toklas, Jack Kerouac, Allen Ginsberg, Gregory Corso, Constatin Brancusi and Andy Warhol.

The book is published just as the impact and significance of his designs are being fully understood. The design aesthetic of the Memphis Group is now closely associated with the style of the 1980s and has infiltrated everything from cushions to Adidas trainers. Many contemporary designers have been directly influenced by the spirit of fun and fantasy that Memphis injected into design. Sottsass’ Valentine typewriter used design to offer personality to a functional object, a precedent that was followed years later by Apple in their transformation of the desktop computer.

Sottsass and his first wife, Fernanda Pivano – a translator for, and dear friend of many of the American poets of the Beat Generation – met and socialised with almost every key cultural figure of Europe in the mid-20th century. Talking about the two weeks that he and Pivano spent with Ernest Hemingway in Cuba, Sottsass described how the writer would begin each morning with a drink – usually gin, champagne or absinthe – and start telling him a story. He said: ‘It was always the same story, but told a little differently.’

Ettore Sottsass and the Poetry of Things reveals unexpected details about the man and his work. In 1943 Sottsass was one of only 4,000 Italian soldiers to volunteer for Mussolini’s reformed army. He said: ‘I didn’t say much, it was the way to get back to Italy.’ Likewise, few people know that the designer intended the two orange ribbon spools on his Valentine typewriter to be the subtle suggestion of a nipple or that he considered this, his best-known project, ‘a mistake’.

British designer and former partner to Sottsass, James Irvine, offered an insight into Sottsass’ preoccupation with colour. Sottsass never used the scientific conventions that usually define colour. Instead he told Irvine he wanted to match the shade of a dress that he remembered Pivano ­– by this point his ex-wife – wearing at a party a decade before. Irvine was tasked with retrieving the dress from Pivano’s apartment, which he succeeded in doing. 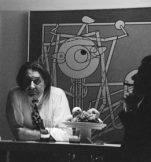