FaulknerBrowns Architects have been appointed by Nottingham City Council in a competitive tender process to design the internal fit-out of the city’s new Central Library—to be located in the new Broadmarsh Car Park building—which the Council wants to feature the best children’s library in the country.

FaulknerBrowns have an international reputation for innovation in library design. Their first library building built in 1963—Jesmond Library in Newcastle upon Tyne—is now Grade II listed having influenced a generation of public libraries in the UK. Since then the practice has continued to push the building typology to meet the changing needs of society. The practice’s two most recent library buildings, Hebburn Central and The Word, National Centre for the Written Word, both received national awards from the Royal Institute of British Architects (RIBA) in 2016 and 2018 respectively.

The Word, represents a real paradigm shift in the community library building typology. It is a library for the 21st century, celebrating the dynamic relationship between people, books, traditional media and interactive technologies, in a truly inspiring environment.

The Library announcement marks further progress in the major development of Southside area of the city, with contractors on site at the Broadmarsh Car Park site, work underway at intu Broadmarsh and at Nottingham College’s new Skills Hub taking shape.

“Nottingham City Council has committed to building a new Central Library and the best children’s library in the country, and to bring on architects with the track record of FaulknerBrowns is exciting for the city.”

“The Word in South Shields is a fantastic building that has helped to regenerate the area and has brought more local people into their library and more visitors from across the country, and we look forward to seeing the proposals they put forward for Nottingham.”

“We are extremely pleased to have the opportunity with this project to build upon the huge success of The Word, the National Centre for the Written Word in South Shields. We are excited by the Council’s ambition to create a library for the future – a destination in the heart of Nottingham city centre to inspire visitors of all ages.” 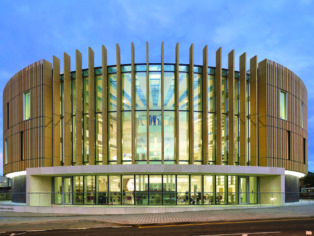