fdcreative design an out of this world lighting scheme for RocketSpace

fdcreative were commissioned to design a lighting scheme for San Francisco-based RocketSpace’s, new tech campus specifically designed to help tech start-ups scale. Working together with LOM architects, fdcreative were tasked with designing a lighting scheme that worked with the campus workspaces, which included the challenge of a large event space which was formerly an underground bank vault.

The Brief to the design team was to create a flexible work environment for up to 1,500 people in the Regent’s House building which included converting the loading bay into a double-height state-of-the-art event space, and NatWest’s former cash vault into a lounge and games room. The basement level had no natural daylight, so the lighting design was integral in creating a consistent look and feel throughout the area. The basement lighting scheme also had to incorporate a double height space used to provide shared social, interactive networking hubs, event space, teaching facilities, media pods, bar and meeting rooms.

The lounge and games room was lit using a mixture of decorative pendants located over seating areas to create an intimate space for people to meet and relax. This was coupled with surface mounted downlights, linear LED wall washers and table lamps to create an environment reminiscent of the John Le Carre novel ‘Tinker, Tailor, Soldier, Spy.’ The lighting was zoned and dimmed to create the desired mood providing emphasis on the soft seating and pool table.

Lighting in the reception area also needed to emphasise the RocketSpace brand. fdcreative used linear LED pendants mounted directly over each desk area to create even lighting. Surface mounted LED downlights were used for general lighting along with a huge bespoke linear pendant which ran around the open plan area. All lighting was Dali dimmable using the Lygo lighting control system allowing the end user to have the ability to control zones of lighting.

The Auditorium entails an impressive double height, the lighting design featured linear LED pendants which provided general lighting, low level recessed step lights and television quality lighting units. fdcreative worked with the Services Engineers Troup Bywaters and Anders Engineering Partnership to ensure the system provided the best possible lighting solution for each requirement as the lighting had to work in a variety of ways and integrate seamlessly with the audio visual and television system.

The contractors removed the existing casing to the feature staircase in the main reception area which provided another challenge for fdcreative. Lighting had to be provided to the reception desk, but this was difficult as there was no actual ceiling directly above the reception desk. Therefore, fdcreative introduced high powered LED directional spot lights to the underside of the stair structure.

Accent lighting was introduced into the bespoke architectural banked seating units, providing visual interest and a sense of depth to the space. Tracked mounted spot lights were used for the general lighting allowing RocketSpace to adjust and focus the lighting as required. 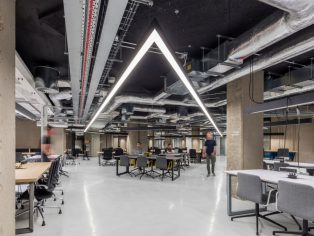 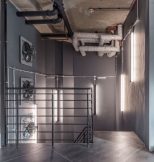 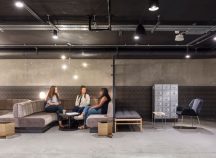