The Conversation Plinth, which has won the Miller Prize, sparks conversation whilst transforming the cityscape, and is situated in the main plaza of Columbus, Indiana for the duration of the exhibition until the end of November. The Miller Prize competition honours J. Irwin Miller and Xenia S. Miller, two patrons of architecture, art and design by continuing their desire to make Columbus the best community of its size.

Conversation Plinth aims to celebrate the community of Columbus while also paying homage to past revolutionaries of design such as J. Irwin Miller who transformed the small city of 46,000 people. The structure takes inspiration from the conversation pit in the living room of the Miller House, as well as the plinths that raise the iconic surrounding landmarks such as Cleo Rogers Memorial Library, Eliel Saarinen’s First Christian Church and the Large Arch designed by Henry Moore. The installation encircles the Moore statue with large timber disks rising upwards, encouraging viewers to change their perspective on the city. Illuminated at night, Conversation Plinth transforms the plaza in which it sits, reflecting the innovative nature of the historic city, offering a place for the community to come together to converse and to consider the design heritage of Columbus.

Although softwood CLT is already in commercial use in the U.S., hardwood CLT is not. As pioneers in the use of the material in the U.S., IKD was awarded a 2017 Wood Innovation grant by the United States Forest Service. The grant was given to develop the material innovation for both the installation and for product certification with the aim of mass production. Led by Yugon Kim and Tomomi Itakura, IKD developed a hardwood CLT made from a mix species, low value grade three common American hardwoods for use in the project.

HCLT offers numerous benefits over softwood, including superior mechanical properties, material volume savings, increased resistance to fire and higher quality appearance in visible settings as The Smile for London Design Festival 2016 demonstrated. This collaboration between Alison Brooks Architects, ARUP and the American Hardwood Export Council was the first structure ever built with industrial sized panels of hardwood CLT and is one year later still receiving awards for its innovation. The Conversation Plinth is also able to demonstrate the abilities of hardwood CLT, with the potential to act as a catalyst for a new timber industry. Indiana’s largest cash crop is hardwood but more than 55 per cent of each log processed is of low value. The project proves that the parts of logs harvested from Indiana’s forests, currently being used to produce low value wood products, can be put to better use with Hardwood CLT. The installation shows that by upcycling low-value hardwood sawn logs, such as grade 3 common oak, maple and ash, a highvalue hardwood CLT can be made and subsequently used in commercial projects.

The inspiring project ultimately seeks to revolutionise the timber industry by demonstrating the viability, value and benefits of hardwood CLT for Indiana and the Midwest. IKD hope that their project will work as a catalyst to initiate effects such as expanding and diversifying hardwood lumber markets, creating higher forest land value, increasing job growth in rural forestry and manufacturing and improving forest management practices to reduces wildfires and encourage biodiversity. 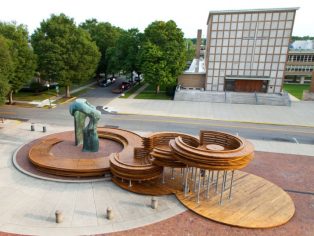 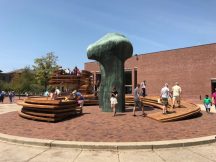