The now approved strategy and masterplan for the multi-million pound transformation of Moscow’s Gorky Park has been prepared by LDA Design – the independent design, environment and energy consultancy that won the international tender to redesign the historic 300 acre (120 ha) park.

Gorky Park was inaugurated in 1928 and is one of Moscow’s most important public spaces – a national icon for Russians and one of the world’s most famous parks. The UK-based practice responsible for the London 2012 Olympic Park and the landscape design for London’s Battersea Power Station redevelopment, set out a vision for Gorky Park – to create ‘a park for everyone, where culture meets nature’.

The resulting strategy and masterplan for the park draws on Russia’s cultural heritage dating back to the 18th century, creating seven distinct landscapes. Each reflects a different historical period and, combined, they create a high quality, distinct and diverse landscape structure. There are also nine destination activity hubs, accommodating uses that appeal to everyone, including waterfront leisure gardens creating a new river frontage; a new space at the heart of the park for cultural and recreational activities; and the Orangery, an 18th century garden building, glass house for horticultural displays and an exhibition space where food will also be grown.

Historic buildings make up a large part of Gorky Park’s attraction and Moscow Park Authority has already invested heavily to restore several. The plans for the park will re-establish the visual relationship with these important landmarks.

The park’s boundary will also be transformed with major improvements to all entrances, and six new points of access. The path network will be reorganised to improve the capacity and distribution of visitors and a new circuit route will connect the seven distinct park landscapes and the nine activity areas, creating a single integrated park.

“Operationally, a successful part emphasis on quality of life, health, wellbeing, play and recreation and worked hard to create opportunities for community and a rich horticultural and ecological experience.”

LDA Design was chosen from a shortlist of 20 international firms by the project board, which included representatives of Moscow City Heritage Department, Moscow Kremlin Museums, the Department of Natural Resources and Environmental Protection, and Strelka Institute, the Institute for Media, Architecture and Design.

The park in numbers: 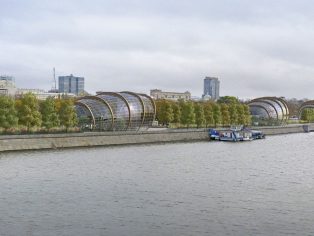