The European Cultural Foundation (ECF) has announced that it is awarding its annual Princess Margriet Award for Culture to the pioneering UK-based research agency, Forensic Architecture, and Polish cultural platform and foundation, Borderland.

Forensic Architecture and Borderland will be presented with the prestigious award by Her Royal Highness Princess Margriet of the Netherlands at a ceremony at the Stadsschouwburg in Amsterdam, before a large international audience on Wednesday 16th May 2018.

Marking its tenth anniversary in 2018, this year’s ECF Princess Margriet Award for Culture celebrates courageous citizens and organisations that are making a difference through culture, including artists and thinkers who are contributing to a more open and democratic Europe.

Chosen by an independent jury of experts for their outstanding work, Forensic Architecture and Borderland each use art as a way of exposing injustice in communities, and to recover and rethink the past in order to change the world.

“The ECF Princess Margriet Award for Culture highlights the change-making capacity of culture. Our laureates are courageous citizens whose social energy gives rise to alternative stories and opens up space for learning, living together and questioning the fundamental nature of democracy.”

Forensic Architecture is a ground-breaking multidisciplinary research group based at Goldsmiths, University of London, made up of a team of international architects, artists, film-makers, scientists, political theorists, students and citizens. Forensic Architecture draws on architectural knowledge and new technological and aesthetic methodologies to meticulously reconstruct sites of conflict, trauma, oppression and injustice. Its carefully constructed investigations have provided decisive evidence in a number of legal cases, including in national and international courts as well as in citizen tribunals and human rights processes, leading to military, parliamentary, and UN inquiries. Alongside their presentation in such political and judicial forums, Forensic Architecture’s investigations have also been shown in cultural and artistic venues as examples of the use of creative practice in an image- and data-laden environment.

Forensic Architecture’s recent and ongoing landmark projects include: constructing an interactive 3D model of  the 2017 Grenfell Tower fire in London, an ongoing project using crowdsourced video footage and testimony as key pieces of evidence; a project with Amnesty International to reconstruct Saydnaya, a Syrian torture prison, and recreate what was happening inside using architectural and acoustic modelling based on the testimonies of survivors; and a counter-investigation into the testimony of German intelligence officer Andreas Temme in relation to the murder of Turkish-German café-owner, Halit Yozgat, by a far-right group in 2006.

“We are delighted that the European Cultural Foundation has awarded us the 2018 Princess Margriet Award for Culture in recognition of Forensic Architecture’s evidentiary work. It is important that — alongside the judicial and political — the cultural domain is acknowledged as a crucial arena of struggle for the exposure of the truth about the world around us.”

Likewise honoured with the Princess Margriet Award for Culture, Borderland is both a foundation (NGO, founded in 1990) and a local centre for cultural encounters, creation and reflection (Centre Borderland of Arts, Cultures and Nations, founded in 1991).

Borderland brings back to the community the artistic imagination of cultures that have disappeared – using a wide range of activities such as exhibitions and (youth) theatre. The foundation also has an internationally renowned Klezmer orchestra (a musical tradition of Ashkenazi Jews in Eastern Europe) and organises workshops and symposiums on cross-cultural dialogue for scholars and cultural practitioners from across the globe. Borderland’s activities bring living culture into dialogue with the region’s rich heritage, bridging different generations, languages, world views, professions and life experiences and contributing to a culture of solidarity for the future.

“The Princess Margaret’s Award is for the Borderland what the golden fleece was for the Argonauts. On the one hand, it crowns our long and arduous journey, overcoming many obstacles and discovering many secrets through the crossing of cultural borders. On the other hand, it serves as a warning that the golden fleece can lose its sheen on its journey back when commitments are disregarded, gifts of hospitality remain unreturned and obligations are unkept.”

“Our intention at Borderland is to put into practise our ‘Culture of Return’ ethos. This philosophy is a challenge to the modern world so often dominated by short-termism a ‘road to the top’ mentality. In contrast, the ‘Culture of Return’ is faithful to the bonds of neighbourhood, to the virtues of hospitality, and the love of the ‘other’. As a result, the Princess Margaret Award will allow us to demonstrate our commitment to returning gifts that have been bestowed on us by the community throughout the years of our presence on the Polish-Lithuanian borderland. We will use it to further develop our efforts to improve the life of the border community, share our knowledge and continue to build bridges with others through programs like the International Center for Dialogue in Krasnogruda and the Mobile Academy of New Agora.”

At the 2017 Awards, HRH Princess Laurentien, President of the European Cultural Foundation, commented:

“We need independent spaces for people from different parts in society to meet and dialogue. Places where everyone is taken seriously yet where no one takes himself too seriously, connecting through focused conversations as well as meeting through serendipity. This is the type of space that culture creates.”

Forensic Architecture and Borderland will each receive a prize of EUR 25,000 and a unique Award, designed by Dutch artist Jan Rothuizen. Her Royal Highness Princess Laurentien of the Netherlands, president of the European Cultural Foundation, will hold the opening speech at this year’s ceremony.

During its ten-year history, the Princess Margriet Award for Culture has named two previous laureates in the UK: cultural theorist and activist, Stuart Hill, and filmmaker John Akomfrah, whose films champion voices that are often hidden from the mainstream discourse of European past. 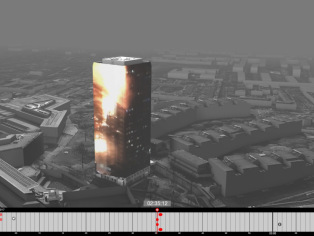