Six Grade II Georgian Townhouses in Gloucester Place, London have been renovated into a comfortable and peaceful hotel with the assistance of Selectaglaze secondary glazing.

Over the last 15 years The Portman Estate has been bringing its buildings up to 21st century standards whilst retaining their historic features.

The most recent of The Portman Estate’s refurbishment projects, is the Gloucester Place development. Most of the buildings along Gloucester Place were built between 1787 and 1792. The terraces were added at a later date and completed in 1820. The townhouses were characteristic of the Georgian period featuring ornate cornices and skirtings inside and uniformed exterior brickwork complete with balconies and cast iron railings.

The original windows, which were draughty, thermally inefficient and allowed noise in, could not be altered as the buildings are Listed. Owing to a long-standing working relationship, The Portman Estate sought advice from Selectaglaze on the best secondary glazing application for their alternative requirements.

Selectaglaze installed 80 secondary glazed units. The Series 90 was used on the larger windows which were up to 3m high and used up to 10.8mm thick glass. It is a heavy duty vertical sliding unit with specialist balances allowing large and weighty panels to operate easily. When thicker glass is used, coupled with a gap between the primary and secondary glazing of at least 100mm; they stop the glass resonating and allowing sound through. Using an acoustic laminated glass helps to absorb the sound further, resulting in noise reductions of at least 46dB.

All the secondary glazed units were fitted with low-E glass, which provides U-values of around 1.8, to help reduce heat loss throughout the building. The inclusion of bespoke fixings to ensure the tightest fit and high performance seals minimises air leakage and draughts, making the environment more comfortable and thermally efficient. Selectaglaze secondary glazing units match existing sight lines to make them virtually unnoticeable.

Selectaglaze has fifty years’ experience working on all manner of buildings from Listed museums to new build hotels and works closely with clients to make buildings warmer, quieter and safer. 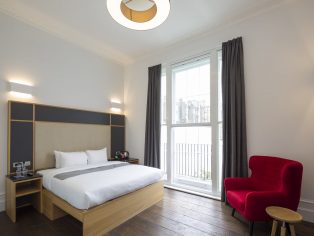