Grant Associates’ designs for two-hectares of public realm at Barangaroo South have been revealed, as the next phase of Sydney’s landmark waterfront development is submitted to planners.

A new harbour cove, a one-hectare public park, an expanded waterfront walkway and a public pier are all key features of Grant Associates’ designs for the public realm at Barangaroo South, a 7.5 hectare, mixed-use scheme being developed and delivered by global urban regeneration specialist Lendlease.

Grant Associates’ proposals for the public space complete the design of Barangaroo South and represent part of the commitment by the Barangaroo Delivery Authority (BDA) and Lendlease to deliver more than half of Barangaroo as open public space.

UK and Singapore based landscape architect Grant Associates aims to integrate Barangaroo South’s stunning waterfront location with a range of public spaces. These will see the former industrial container terminal completely transformed into a pedestrian friendly area with open views across Sydney’s harbour.

Designs include Waterman’s Cove and a fully-accessible amphitheatre-style boardwalk on the water. The new public realm also features the one-hectare Hickson Park that will provide a green link from Sydney’s Central Business District into the heart of Barangaroo’s retail and dining precinct, which is adjacent to the slender new residential towers designed by the internationally acclaimed architect Renzo Piano. There will also be an extension to Wulugul Walk around the Crown Sydney Hotel Resort.

Lendlease will shortly lodge a Development Application with the Department of Planning and Environment, which will be available on public exhibition as part of the planning process. The new park and associated public space is anticipated to open in 2021.

“Barangaroo has already become a popular destination on Sydney’s waterfront. Our proposal for Waterman’s Cove takes full advantage of the Sydney Harbour backdrop to create a distinctive new public space right at the water’s edge. By contrast Hickson Park offers a calm, green and sheltered open space for the enjoyment of local residents, workers and visitors.”

“We have worked hard to focus on the design of a series of spaces that offer memorable and distinctive experiences for a wide range of users. They are a significant component of the extensive public realm framework that is proposed for Barangaroo and represent the final piece in the completion of the public realm for this part of the precinct.”

Craig van der Laan, Chief Executive Officer of the Barangaroo Delivery Authority, said: “This is an exciting proposal for the creation of more beautiful public spaces at Barangaroo, which will be of enormous benefit to the people of Sydney. The new harbour cove and public park represent the next step in the extraordinary transformation of Barangaroo from a 22-hectare concrete container terminal into a world class, vibrant waterfront precinct.”

Rob Deck, Lendlease’s Managing Director of Barangaroo South, said: “We are delighted to be working with the Authority and Grant Associates on this next important stage of Barangaroo South. Grant Associates will bring their extensive international expertise to create a truly exceptional public space, building upon the successful first stage which Sydney-siders are already enjoying.”

Barangaroo South is one area of a wider scheme to redevelop Barangaroo, an inner city suburb that spans 22 hectares along Sydney’s harbour to the north-west of the city’s Central Business District. Barangaroo is split into three distinct development areas;

The Barangaroo Delivery Authority is overseeing the entire project on behalf of the New South Wales Government. 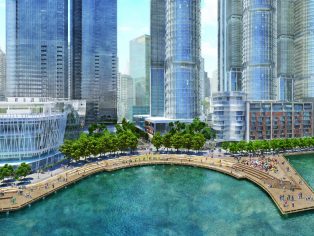