This year’s MIPIM property exhibition has been hailed as “the most positive in years” by members of Greater Birmingham’s delegation, with an increased audience of investors taking notice of the momentum and ambition of the region’s large scale development projects.

From the huge investment to transform 141 hectares of the city centre with the Birmingham Curzon HS2 masterplan; the unique concentration of assets on offer at UK Central in Solihull; and the announcement of charter flights from Birmingham to China, Greater Birmingham was showcased as a region not only with clear and ambitious plans but with the support and investor interest to deliver.

In total, 20,500 delegates from 93 countries attended this year’s exhibition. Greater Birmingham took the opportunity to talk to this audience of investors and influencers about its developments and future plans. Growing interest saw the value of positive media coverage of Greater Birmingham top £810,000, up 50% from last year. Meanwhile the area’s use of social media helped its message reach more than 800,000 accounts over the event. Visits to the inward investment website businessbirmingham.com were up by nearly 40% as a result of Twitter activity and over 120% from LinkedIn posts, compared to 2013.

The Greater Birmingham delegation staged or participated in 17 events, directly highlighting the region’s investment opportunities and credentials. These included two events on the influential main MIPIM conference programme. Leader of Birmingham City Council Sir Albert Bore joined other regional city heads to discuss how they were attracting investment in their respective knowledge economies and the potential of HS2 to transform the regions and rebalance the UK economy.

“It was a good MIPIM for Greater Birmingham. We had a lot of developer interest – in our housing projects, the office market and in what we had to say. There’s a lot to follow up.

“We had much to talk about this year. By showcasing our plans for large development sites like those at the former Selly Oak Hospital, Icknield Port Loop, UK Central and Paradise Circus, we were able to show that we have ambition and momentum in Greater Birmingham. Investors are taking notice.”

“MIPIM undoubtedly provides a unique opportunity to access decision makers, influencers and investors on a scale that cannot be achieved easily elsewhere.

“By joining forces with Birmingham and Solihull, we were able to play an active role in promoting our part of the world to this audience to great effect. Leveraging the optimism created by the area’s major developments and ambitious plans, we were able to raise awareness and understanding of the Black Country’s offering and build relationships that we will develop in the months to come.”

“As part of the Greater Birmingham delegation, Solihull Council was able to take advantage of the wide interest that was attracted by all of the partners working together.

“It was an opportunity to test developer and investor interest in the plans for UK Central and to assess the competition from other countries.

“We are delighted with the interest that we received, which confirms our view that we have a unique combination of assets and opportunities in UK Central which will attract international investment.”

Greater Birmingham picked up eight FDI Intelligence awards during the event, recognising the region’s status as a leading European destination for foreign investors. Birmingham was ranked in the top 20 European Cities of the Future 2014/15 by the influential guide and in the top three for the foreign direct investment (FDI) strategies of large cities, the only English city to feature in this category. In a further boost, Walsall was recognised in the Top 10 for Business Friendliness in the European Small Cities category and the Black Country featured in the Top 10 in the UK LEP category for FDI strategy. 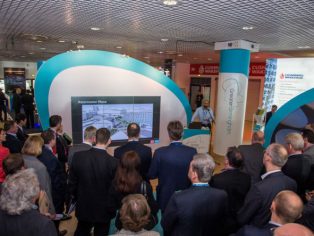