Built in the late 18th century on the site of a Franciscan Monastery, GreyFriars was an impressive family home with a fine Georgian facade and formal gardens. It remained a home until the late 19th century and was occupied by many leaders of Colchester’s society.

At the start of the 20th century Greyfriars was sold to the Ladies of Nazareth for use as a convent. When they returned to France, the house became an education centre until it went up for sale in 2007.

A period of several years followed, during which the new owner, OMC Investments Limited eventually acquired planning permission to create a luxury hotel and restaurant in GreyFriars. Meticulous attention to detail has been dedicated to repair the period features in the building and to restore it to its former grandeur. An essential issue to resolve was the problem of old windows and glazing, not only causing heat loss and draughts, but admitting the ingress and egress of noise. Set to become a hotel of grand luxe, it was of great importance to ensure the building performed to 21st century standards providing guests with a peaceful and comfortable night’s sleep.

Secondary glazing is fitted to the room side of the existing primary window. When high performance seals are used, secondary glazing can virtually illuminate drafts and reduces heat loss. Secondary glazing also has the benefit of improved noise reduction, attaining sound reductions to 45dB when fitted with an air gap of 100mm.

Selectaglaze fitted over a hundred units using nine different systems, tailoring the units specifically to the project’s needs. Some of the windows were curved which needed to be carefully designed and some carefully treated to allow access to some beautiful original stained glass for cleaning and maintenance.

The majority of the windows were fitted with 6mm toughened glass, but in one particular area 10.8 Stadip Silence was used for noise containment to prevent disturbing people outside of the building.

Founded in 1966, Royal Warrant Holder Selectaglaze is the acknowledged specialists and market leaders in the design, manufacture and installation of secondary window systems.

For further information, literature and test results, please contact Selectaglaze on 01727 837271/e-mail:enquiries(Replace this parenthesis with the @ sign)selectaglaze.co.uk or visit the company’s website. 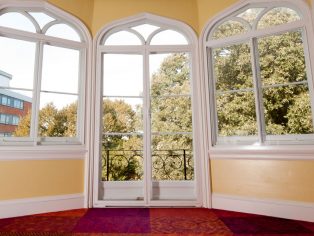