Saskatoon is a rapidly growing city in central Saskatchewan, Canada where the Wilsons Group of Horticultural related companies, owned by brothers Steve and Carl Wilson are planning to build a new $5 million Garden Centre.

They already own 80 acres of land on which approximately 8 acres will be used for the new centre. Two years ago the brothers began discussions with Ower based Architects HPW thanks to the Hampshire firm’s excellent reputation within the Garden Centre industry. HPW have since advised them throughout the site appraisal process and provided masterplan layouts and visuals to negotiate with the City and developers in Saskatoon and, following a visit by the Wilson brothers to their Ower offices, have now been awarded the project.

“We really need to work with people who fully understand the garden centre industry. HPW has a great track record, not only in the construction of Garden Centres, but the interior design and also the full branding opportunity. We look forward to getting the project started immediately.”

Gary Wilburn, Director of Design and Sustainability at HPW say that they were delighted to meet the Wilsons and also to gain the contract:

“Whilst most of our projects have been with major UK groups such as Dobbies, Blooms and Wyvale, also Haskins Garden Centres at West End Southampton, we have also successfully worked in Germany for Worlein Garden World near Munich, this will be our first on the continent of North America”

HPW, founded in 1986 currently employs a team of 18 qualified and experienced personnel to cover demand from the retail, leisure and high quality residential developments. 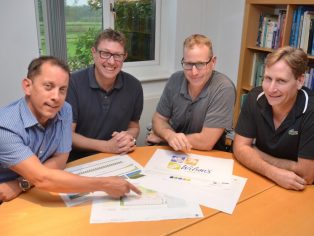