Hampshire based Architects HPW are celebrating the latest stage of planning for a £50 million leisure project on a 244 acre brownfield site at Rushden in Northamptonshire.

It will be the biggest project assigned to the team based at Ower in the company’s 29 year history. Gary Wilburn, Director of Design and Sustainability at HPW says that although “only” 30 acres are to be developed on the site within a Special Protection Area, a Site of Special Scientific Interest and the Nene Valley Nature Improvement Area, meetings with a multitude of national environmental organisations have demonstrated that the developer, LXB Retail Properties Plc, can enhance the brownfield site that has been vacant for 25 years, having been announced by the Secretary of State.

Gary Wilburn at the recent public consultation which was attended by a staggering 750 plus residents where 98 per cent of the written comments were positive, said:

“It’s been an amazing project so far that has required various degrees of foresight, patience and determination, not to mention thousands of drawings to help meet the requirements, not just for the natural environment, but also for the changing commercial environment and demands from the retail and leisure sector.”

Construction on the 380,000 sq ft of shops, anchored by House of Fraser, M & S and Primark Store, a total seven restaurants with a cafe in a Wildlife Trust visitors centre, and a boathouse to be operated by a local company, is expected to commence in the summer of 2017 with McLaren as the main contractor.

Jon McCarthy, Principal at LXB Retail Properties says that working with HPW on a major award winning Garden Centre project in 2007 at Bicester, proved that the team could deliver the Rushden Lakes project:

“We wanted a team that could mirror and improve the success at Bicester and include their flair for contemporary architecture and a natural sympathy to the environment.”

HPW, founded in 1986 currently employs a team of 18 qualified and experienced personnel to cover demand from the retail, leisure and high quality residential developments. 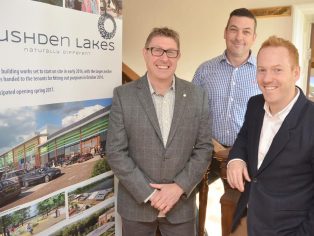