Hauraton beat the competition at the Community Sports Complex in Doncaster

The Community Sports Complex in Doncaster has been imaginatively planned and built to the highest architectural standards. The development integrates sport and community facilities in a spectacular parkland setting. Doncaster Council is confident it will raise the town’s profile locally, regionally and nationally and help to significantly increase the numbers of local people watching and taking part in sport and other community activities.

At the heart of the complex is a 15,100 capacity community stadium that incorporates an 800 square meter supporters bar, plus a 350 seat restaurant, a gymnasium and martial arts centre. The stadium is complemented by a separate floodlit six lane athletics track with two eight lane straights and its own covered 500 seat mini-stand. Other facilities include two floodlit reinforced and grass sports fields, 11 floodlit all weather pitches for five and seven a-side team games, a 10 acre public park and a 1000 space car park.

The location of the Complex has meant particular attention was paid to rainwater run-off and pipe depth issues in general. WSP Consulting Engineers were appointed for this part of the project. In discussion with main contractors Carillion, it was decided to use Hauraton injection moulded polypropylene RECYFIX® SUPER drainage channels around the perimeter of the stadium. 640 metres of channel was eventually specified, plus a further 340 metres of pitch-side drainage inside the stadium itself. RECYFIX® SUPER was chosen for being strong yet light enough to comply with manual lifting regulations. Subsequently, 250 metres of same channel was also used to drain walkways and around the five-a-side pitches. Hauraton also supplied the components for the athletic track water jump and the long jump sand trap.

“The larger sizes of Recyfix® Super channel were initially considered for the car park. However because of its position and relation to the nearby lake it was essential the depth of the system was kept to a minimum. It was realised there could only be one outlet at the end of each run, located to one side of the car park. Using RECYFIX® SUPER would have entail installing too many trash boxes and deep pipe drains therefore a high capacity channel was the only practical solution. After further consideration our newly introduced RECYFIX® HICAP® system was found to answer the problem perfectly”.

Hauraton’s Sales and Marketing Director, Tim Connolly was very pleased with the feed-back from the contractors,

“Carillion seemed to be impressed with the ease and speed of installing all our systems due to the one man lift capability. Calls from site during and after installation proved these benefits to be the case. Carillion’s site agent was pleased with the speed at which all the RECYFIX® channels had been installed, even those that were cut to shape, this apparently saved many man hours. The installing teams were also very happy “much easier on my back” and “a lot less fiddly to install” were their comments. Asked how the Recyfix® products compared to other channel systems, the overwhelming response was; it was far better than larger, heavier units made from concrete and polymer materials because they enabled simplified installation procedures”.

“We are delighted that all concerned in the project found our product so “installer friendly” and that the massive investment Hauraton have made in recent years in new products has been justified with much lower installation costs for contractors, as proved on the Doncaster project”. 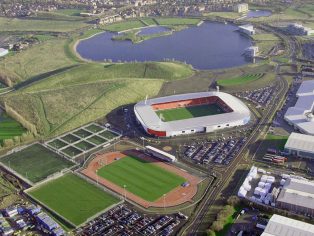 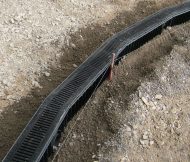