With the Heslington East Campus site being quite flat, deep drains were not possible so rainwater from roofs, road and pathways had to be directed in a series of culverts, surface drainage channels and rills, eventually discharging into a lake. The Sustainable Urban Drainage Scheme included the control of rainwater from roofs via downpipes into a series of buried, stepped shallow culverts made from two sizes of FASERFIX® SUPER channel fitted with solid ductile iron covers. Surface water drainage with ductile iron gratings were provided in the same channel runs where channels crossed paved footpaths or asphalted areas. Pairs of FASERFIX® SUPER 300 channels fitted with solid covers were also installed adjacent to each other in the rills to create tunnels under roadways and paths. RECYFIX® SLOTTED channels with their unobtrusive galvanised slot inlets were specified for the pedestrian routes and concourses.

“Over 1600 metres of Hauraton drainage channel have been installed by Howard Civil Engineering Limited with no breakages reported during the installation stages.” 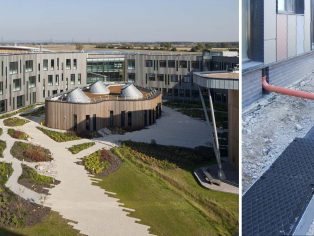