Officially opened in July 2009 the 26,500 seat Cardiff City Stadium is at the heart of major new infrastructure project in Leckwith, located to the West of the Welsh Capital.

The Stadium is part of a multi million pound development that also includes the 43,964 m² Capital Retail Park, a 5000 capacity, IAAF approved International Athletics and community sports venue and a 70 room hotel.

Landscaped roads into the Retail Park incorporate over 600 metres of Hauraton ENVIROKERB kerb-side drainage. Having the appearance of standard concrete kerb, the components are in fact made from 100% recycled material that weighs far less than concrete, allowing units to comply with the maximum 25kg “one-man-lift” legislation.

The drainage in the 1500 space retail car park was a tricky problem. Because of its position between the Stadium and Retail development it was essential that rainwater run-off in this highly used area would be effectively drained. 530 metres of Hauraton RECYFIX® HICAP® high capacity, slotted drainage channel was found to be the answer. A further 495 metres of HICAP®  were used to drain the commercial access areas. 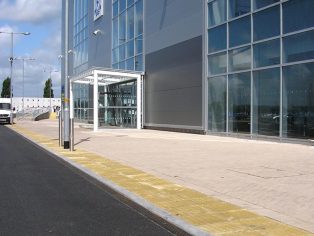 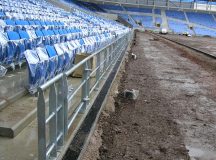