Located on the edge of the British continental shelf some 125km north-west of the Shetland Islands, lie the Laggan and Tormore gas and liquid hydrocarbon (Petroleum) fields, surely a uniquely challenging environment, but one with great potential for the UK energy industry.

To process the gas and liquid hydrocarbon reserves a new on-shore plant is being built on a 540,000m² site located to the east of the established Sullom Voe oil terminal on Shetland. The new plant will occupy an area of about 250,000m².

Started in early 2010, the Shetland Gas Plant will be connected to the Laggan-Tormore offshore subsea production system which is being jointly developed by Total E&P UK and Dong E&P (UK). Once operational, the Gas Plant will be capable of processing up to 500 million standard cubic feet of gas per day and will employ around 70 people. Planned to be on stream by mid 2014, the new facility will be operated by Total.

An initial contract was awarded to Irish company, Roadbridge in March 2010 to carry out the site preparation works and the construction of a 2.4 mile access road.

The engineering, procurement, supply, construction and commissioning contract for the plant itself was awarded to Petrofac Offshore Engineering & Operations unit in October 2010. Morrison Construction was then awarded a contract by Petrofac in June 2011 to carry out site infrastructure works including underground and surface water drainage facilities, roadways and buildings.

With the shoreline and waters around Sullom Voe home to large populations of seals, dolphins and other sensitive wildlife habitats – there are a number of offshore Special Areas of Conservation (SAC) in the area, Morrison Construction and other contractors were asked to ensure any ecological impact was minimised during and after the construction phases.

The Shetland Gas Plant site is situated on a steep slope and required extensive earthworks. This together with the plant’s location and harsh weather conditions characterised by 1000 to 1700mm annual average rainfall and frequent storm events, meant the surface water drainage system employed would have to be robust and very efficient at controlling surface water runoff.

All collected surface water had to be channelled into a separator, tested for contamination before being released into the sea.

Calculating the hydraulic performance needed, Morrison Construction were looking for a channel system available in at least three sizes to drain the site’s roads and service areas. After dialogue with Hauraton UK Technical Support staff, the company’s FASERFIX® SUPER 300, 400 and 500 channels were specified with Class D400 ductile iron slotted gratings.

The grating specification chosen featured parallel rows of 20mm wide slots, each half metre grating being secured to the channel with the company’s patented SIDE-LOCK system and eight high tensile bolts. The order for the 1425 metres of channel required was placed with Builders Merchants Grafton Group contracts office in Glasgow, who decided to process the orders through their Buildbase Shetland Depot in Lerwick.

Tim Connolly Sales and Marketing Director at Hauraton outlines the features and benefits of FASERFIX® SUPER channels that made them ideal for the Shetland Gas Plant project:

“Hauraton have for the last 50 years been at the forefront of manufacturing robust Fibre Reinforced Concrete (FRC) surface water drainage systems that are today distributed and installed around the world in some of the harshest environments.

“The FRC perfected by the company in the mid 70’s allows our FASERFIX® channels and trash boxes to have much thinner walls yet are very much stronger when compared with similar non-reinforced concrete products. A standard feature of FASERFIX® SUPER channels are galvanised steel pressings securely moulded on to the top edges of the channel during production, this detail allied with the Class D400 ductile iron gratings provides exceptional wear resistance and increased load bearing capability. Unlike some other well known makes, FASERFIX® components are so strong, even prior to installation they are able to endure the rigours of site work so reducing waste and down time”.

For Case Study go to www.hauraton.co.uk 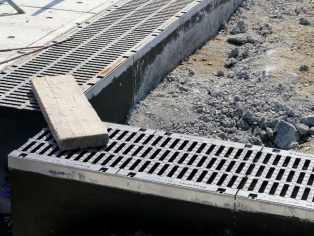 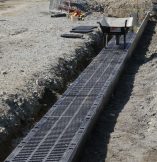