Cork International is one of the Irish Republic’s big-three airports. It ranks between Dublin and Shannon in terms of passenger throughput, handling about three million passengers per year. Boasting modern infrastructure and on-site amenities, the airport offers sophisticated facilities for the traveller. The Government of Ireland owns the airport and it is operated by the Dublin Airport Authority (DAA).

Beginning in June 2003 a €144.3 million investment in new 28,300m² facilities at Cork International Airport was completed in August 2006. The development included a new terminal and hard standing for parked aircraft. The hard standing area was drained by three sizes of Hauraton RECYFIX® HICAP® high capacity channels – 150, 200 and 300. All the sizes had fixed ductile iron 28mm open slot inlets that comply with loading category Class F900.

Having supplied high capacity surface water drainage channels for aircraft hard-standing areas at both Gatwick and Heathrow, UK airports, Hauraton were confident their RECYFIX® HICAP® channels would comply with the stringent specification asked for by the Cork Airport design engineers.

With aircraft tow trucks alone weighing 80 tonnes, manoeuvring aircraft impose an enormous burden on any surface drainage system. Not only must the area be efficiently drained, the installed system must also withstand the twisting forces exerted by turning aircraft and numerous service trucks.

During the construction stage, just over 300 metres of RECYFIX® HICAP® were installed in the airport’s taxiways and hard-standing areas adjacent to the terminal building.

“The HICAP® channel components are made from specially formulated recycled polyethylene (PP), the heaviest one metre channel used, with the ductile iron inlet, weighed 25kg so allowed one-man-lift of the unit. This greatly simplified handling and logistics for merchant and contractor who found the combination of a tough PP channel and ductile iron slotted inlet resisted site damage during installation. The completion of this project means Cork ranks as one of the best regional airports in Ireland with its modern facilities and state of the art equipment. As with all Hauraton surface water drainage channels, the performance of the RECYFIX® HICAP®  range complies with European Standards (hENs) and carries the CE mark”. 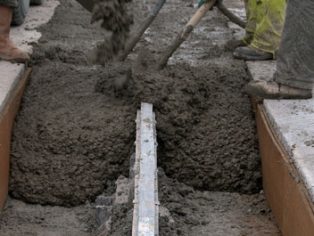