Hope Construction Materials, the UK’s largest independent supplier of construction materials, has completed the supply of 12,500m3 of concrete for the build of more than 300 new military homes.

The project, which launched in August, saw 346 new homes built, with Hope providing the concrete slab flooring for each home, using their HOPEFlow high-performance, self-compacting concretes, to ensure that the build was completed to a stringent timescale.

Around 1,000 troops from the 16 Signal Regiment and 1 Armoured Division Signal Regiment will be housed on the Beaconside site, as part of the £51m ‘super garrison’ development funded by the Ministry of Defence. The timber frame housing build, the largest of its kind in Britain, is being fulfilled by social housing specialists Lovell.

Typically a build of this size would take between three and four years, however to be able to accommodate troops returning from Germany, it needs to be completed in just 11 months.

As such the HOPEFlow performance products were used in a bid to minimise cost and project duration, laying 20 slabs (and homes) per week as opposed to an average of four. By doing so groundwork subcontractor Chasetown were able to save time and money, pouring the slabs without the need of power floating, with slab construction time reduced by nearly 75 per cent.

Both sites are within close proximity to the Beaconsfield site, ensuring that the carbon footprint of the project was kept to a minimum, in line with Hope’s ambitious sustainability targets.

“Since its launch the HOPEFlow product has proven particularly popular and we are delighted to have used it on what was an important and substantial building initiative. This was a large-scale project and there was a real desire to complete the build quickly and professionally to ensure available housing when our troops return to Britain. We’re pleased that by using HOPEFlow we vastly reduced the build time of the project to get the soldiers in their homes as soon as possible.”

“We were working to particularly tight deadlines in order to ensure that the homes were ready for when the troops return home and HOPEFlow has played a major role in being able to meet this demand due to its fast pouring time. This simply wouldn’t be possible without it.” 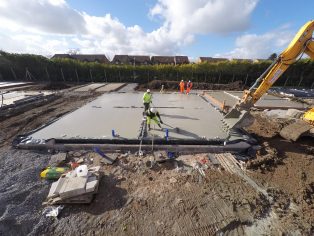