A Girlguiding activity centre in Cheshire had Hunter Douglas Architectural’s innovative felt ceiling installed in the second development phase after the architect was so impressed with its performance in the first building.

John Piercy Holroyd, Associate Director of Walker Simpson Architects, had specified Heartfelt® in the first building at Pettypool, which was commissioned by Girlguiding Cheshire Forest.

When the second phase was under construction, Heartfelt®was specified again for the common areas of the bedroom block, instead of gypsum plank, which had been originally earmarked, because of its superior acoustic performance and aesthetic qualities.

“It helped us to transform the idea of what is basically a circulation space to somewhere that feels quite special. It raised the profile of how that area would feel,” said John.

The architect developed new graphics and colourways on the flooring to complement the 35m2 of Heartfelt ceiling in ‘Off-white’ (7595), ‘Light Grey’ (7596), ‘Middle Grey’ (7597), and also adapted the lighting system so that it better complemented the first phase. 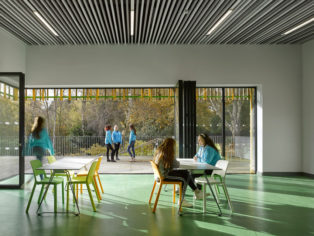 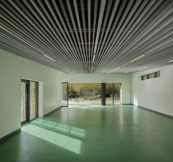