Albert Road Wesleyan Methodist Church, Penarth, was built in 1907 and its schoolroom was destroyed by bombing in World War Two. The church was later converted into a multi-purpose building, still including a place of worship, but with most of it given over to local community services.

Since being used as a community centre it had fallen into disrepair and in 2012 it was converted into eight luxury apartments, including two spacious duplexes. They were all designed to utilise as effectively as possible all the available space afforded by the original large church with its vaulted ceiling. Renovation features include attic style storage space and glass walled decks for split level loft style accommodation, whilst much of the original church’s heritage, original design and architectural features have also been retained. These include the original rafters and coving, along with the bell tower – now a wine cellar with roof top terrace.

Originally, electric underfloor heating had been installed to heat the apartment, but it had soon become apparent that this was inadequate to provide sufficient heating for the living space with its very high ceilings.

Fuel bills were ranging from £600-£700 a month, yet even with the addition of portable calor gas and electric fan heaters, the desired warmth levels were still not being achieved.

Looking for an alternative more effective and more energy efficient approach, a British Gas engineer suggested to the Fishers that a Johnson & Starley warm air heating system with provision of domestic hot water could prove a solution. Following a site visit and professional advice from Independent Heating System Designer Barry Williamson, a specification for a heating system, including detailed heat loss calculations, was drawn up. The solution was based on the installation of a Johnson & Starley WarmCair C20DW high efficiency combined warm air condensing heater with domestic hot water.

“The apartment presented some challenges in terms of designing and installing a warm air heating system that could do the job. It’s an unusually shaped apartment with high ceilings and a delightful internal décor. This needed to be considered carefully when designing the installation of the required ductwork to distribute warmed air in the most effective way.”

To maintain the highly attractive look of the apartment, ducting was concealed around the apartment behind the ceiling in the bedrooms, kitchen, bathrooms and en-suite, with discreet outlet grills in each room and two at floor level in the main living area. Extract vents remove the warm air that has risen to the wood panelled ceiling level and duct it back down to ground level for energy saving recirculation. The thermostat is in the main living room, in the centre of the wall below the balcony, so that the temperature reading gives a more accurate figure of room temperature.

Although the underfloor heating has been retained, it is no longer required. Only the fully Building Regulations Part L compliant, the WarmCair C20DW is now used. It has the added advantage of domestic hot water provision rather than having to rely upon a standard tank with an immersion heater. With a thermal efficiency up to 98 per cent and its 20kW output, the WarmCair C20DW is ideal for the size of the apartment and fulfils all of Mr & Mrs Fisher’s requirements.

For extra energy efficiency it is fully modulating and includes a condensate pump as standard as well as the Cleanflow electronic air filtration option.

“The WarmCair is a new generation of warm air heating, ideal for this type of heritage project. It performs at least as well as a modern gas fired wet heating system, but without the unsightly clutter of radiators.  Furthermore with warm air heating there is no heat loss compared with that which is encountered when hot water is circulated through radiators to heat the house,” says Barry Williamson.

A 180 litre Aquastar hot water storage cylinder has been installed. It is made from high-grade stainless steel and retains heat using a 50mm layer of insulation. The capacity is more than enough to store the hot water generated by the WarmCair and required by the Fishers. It also features a 3kW backup immersion heater.

The complete installation was undertaken by Robin Hefter of Shackleton Wintle and it took 10 working days to complete due to the scale and challenge of the project. This included drilling the solid three feet thick church walls. Said Robin Heffter Managing Director of Shackleton-Wintle:

“It was an interesting job with many technical challenges, but the results made everything worthwhile.  Mr & Mrs Fisher were for the first time in 4 years warm this winter and are extremely happy with their warm and comfortable fast acting heating system.”

Since installation, the results have been all that Mr. Mrs Fisher could have hoped for. Previously the underfloor heating had to remain on all the time to generate warmth within the property, whereas now Mr & Mrs Fisher put on the heating on arrival and the effect is almost immediate thanks to the fast warm up times. In terms of domestic hot water (DHW), previously the immersion heater would need to be on for 24 hours a day, but now the WarmCair is only turned on for 2-3 hours a day and there is always hot water – even when the family comes to stay. Overall, bills for heating and hot water have been reduced by 40per cent.

The main entrance hall, at the bottom of the bell tower, was suffering from mould and damp, evidenced by peeling paint and the aroma. To combat this, Johnson & Starley’s Home ‘n Dry unit has been installed. It is situated in the coat cupboard just adjacent to the stair well. A hole cut through the wall and a diffuser fitted with the ducting, takes in warm air from the main dwelling to be used by the unit.

The Home ‘n Dry is a whole-house, positive input ventilation system that introduces a constant flow of dry air that reduces relative humidity. The system creates a positive pressure forcing the stale air to escape through the fabric of the building. The fan speed of its low energy DC fan can be adjusted and running costs can be as little as 1p per day.

It is achieving good results and the damp is being alleviated. Further remedial works to the brickwork outside will also be undertaken, but the Home ‘n Dry has already made a massive difference to the inside with the damp/mould receding and the smell almost gone.

Mrs Fisher said: “ I love the heating now and there is never any need to have it set higher than level six on the thermostat,  21 – 24 ºC. Another advantage is that with WarmCair warm air heating, there are no unsightly pipes or radiators to spoil the look of our lovely apartment. 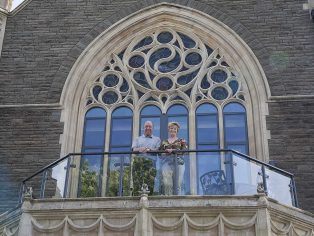