World Architecture Festival (WAF) is calling on London’s next generation of architects to design the bridges, towers and London Squares of the future in association with LEGO.

Parents and children are invited to join the free WAF London Family Day on Saturday 27 June, to view over 400 of the world’s best new architectural projects exhibited at P3 Ambika, Westminster University, and to be inspired to construct their own creations under the supervision of one of the world’s foremost LEGO artists, Duncan Titmarsh.

Budding young architects and designers of all ages have the opportunity to win some great LEGO prizes, including four tickets to LEGOLAND, Windsor. Families will have the added opportunity to see teams from eminent schools of architecture and design, including University of Westminster, Ravensbourne and Southbank University, participate in a professional design charette – a collaborative session where a group of designers drafts a solution to a design problem – themed on redesigning the London Square.

The WAF London LEGO Family Day marks the culmination of a three-day programme of talks, presentations and debates upon which both the architectural profession and general public can participate in the ‘big conversations’ affecting international design.

WAF, the largest global gathering in the architectural calendar, was founded in 2008 and the annual event has previously been held in Barcelona and Singapore. As part of London Festival of Architecture, WAF will be coming to London with a free satellite event for the first time from 24 to 27 June 2015.

Hosted by the University of Westminster, WAF London is an exhibition of the world’s best and most exciting international architecture. Free for the public to attend, it will provide an exclusive first look at more than 400 shortlisted projects from the some of the world-leading architects and practices, before they present their projects to the high-profile international jury at the World Architecture Festival Awards, Singapore in November 2015. 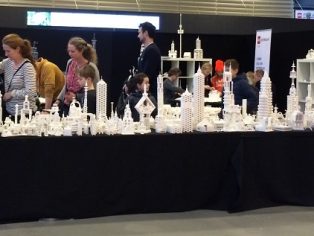