Jutaku: Japanese Houses, published by Phaidon in October, reveals the breadth and novelty of contemporary residential architecture in Japan through more than 400 houses.

‘Jutaku’ is the Japanese word for ‘house’. The book illustrates an era of continuous experimentation, as Japanese architects of the 21st century abandon traditional and conventional style, size and shape to create homes the likes of which would not be found elsewhere.

An insatiable appetite for the new, combined with a heavy demand for space in densely populated cities, has resulted in a 30-year average lifespan of a Japanese house. It has become commonplace to buy a plot, sometimes as narrow as 1.8 metres wide, and demolish what is there to make way for a custom-designed home. Architects are contending with exacting building requirements – such as the Sunshine Laws that restrict the amount of daylight a building can obscure – and substantial pressure to come up with a modern home in extreme conditions.

The result is an abundance of houses defined by contorted geometry – steeply sloping roofs, curved or tilted walls, stepped profiles and stacked interiors – and increasingly innovative use of building materials both old and new. There are glass-skinned crystalline creations, blocky apparently windowless houses skeletal, stripped-down buildings; and houses that would look more at home on the lot of a 1970s sci-fi feature film.

Jutaku features over 400 houses – one image per house, one house per page – in a format that evokes the directness and immediacy of social media platforms such as Pinterest and Instagram. It includes the work of many of Japan’s most-celebrated architects, like Shigeru Ban, Sou Fujimoto, Kengo Kuma, Kazuyo Sejima, Jun Igarashi and Shuhei Endo, alongside many talented, up-and-coming practices.

The projects are arranged geographically and colour-coded according to the eight regions of Japan from snowy Hokkaido in the north to sunny Okinawa in the south. Each photograph is accompanied by a short caption detailing the buildings’ name, location and architect as well as three infographics, which illustrate the relative size, floor and site area and number of occupants. The eight-page introduction by Naomi Pollock, Tokyo-based architectural writer, provides context and explores key themes addressed by Japanese residential architects. The book includes a complete directory of the featured architects and a directory of houses by size. 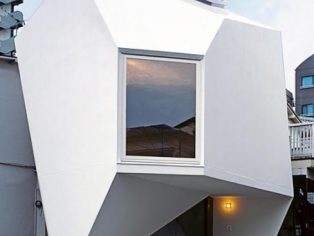