Kajima backs the launch of ‘The Japanese House: Architecture and Life after 1945’ exhibition hosted at the Barbican Centre

Sponsored by Kajima, the exhibition will feature some of the most astounding work by leading Japanese architects in the post-war period The ethos of the exhibition mirrors Kajima’s own proposition of ‘creating the human place’.

Award-winning London-based property developer and investor, Kajima, the European arm of Japan’s Kajima Corporation, a top fifty global construction company (ENR 2016 Global Contractor List), is pleased to announce its sponsorship of ‘The Japanese House: Architecture and Life after 1945’, the first major UK exhibition to focus on Japanese domestic architecture from the end of the Second World War to the present day.

Hosted by the Barbican, the exhibition will run from the 23rd March until the 25th June 2017, and showcases how architects forged a new and more human approach to residential development in the immediate post-war period in Japan, mirroring Kajima’s core brand proposition, “Creating the human place”, and Kajima Corporation’s motto, “Building with the Heart and Soul of a Craftsman”.

The subject is particularly timely as Kajima UK continues to increase its involvement in social infrastructure, regeneration projects and workspace development.  The sponsorship is also a way for Kajima to celebrate its connection to Japan, with its excellent traditions of quality workmanship and design simplicity.

The exhibition will feature the very best of Japanese architectural design, some of which has never before been seen in the UK. The exhibition features the work of over 40 Japanese architects, from the internationally renowned such as Tadao Ando, Toyo Ito, Kazuyo Sejima, Kenzo Tange and Pritzker prize winner Ryue Nishizawa, to rising stars such as Hideyuki Nakayama and Chie Konno.

Visitors will be able to view the changing styles of Japanese design and construction from 1945 until today, illustrating the cultural changes that have transformed the nation, incorporating cinema, photography, architecture and art.  In the aftermath of the Second World War, the destruction of Tokyo and other cities in Japan ushered in an urgent need for new housing, and launched a new age of architectural design in the country.

At the centre of the exhibition will be a full size recreation of the ‘Moriyama House’ by Ryue Nishizawa, widely regarded as one of the most influential houses of the 21st century. The building is composed of ten individual prefabricated units, each room differing in size and immerses visitors into Japanese life, featuring hundreds of objects including books, music and films.

“We are very pleased to be supporting the Barbican on an exhibition which gives visitors a unique insight into changing Japanese architecture, construction and design. As the subsidiary of a major Japanese corporation, Kajima’s work in the UK is strongly influenced by the Japanese traditions of quality workmanship and design simplicity. The message of the exhibition, which is to focus on the needs of the individual, is a message for us all.” 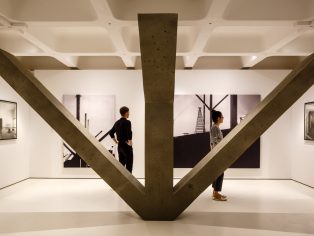