Independent charity Ronald McDonald House has announced it has secured planning permission for a new facility at the South Glasgow Hospitals Campus.

The new Ronald McDonald House, which will provide free amenities and accommodation for families of sick children from all over Scotland who are being treated in the children’s hospital, will replace the current facility at Yorkhill when it is relocated to the South Glasgow Campus.

Designed by leading UK-based architectural practice Keppie on behalf of Ronald McDonald House Charities, the building will comprise three white brick traditional forms with slate pitched roofs. These will be interconnected by glazed openings that add distinction to the main entrance.

Internally the environment will be light, airy and welcoming with ceilings following the external roofline to provide added drama to internal communal spaces. A calming domestic environment throughout will be achieved through carefully chosen materials and fixtures.

“It is an honour for us to work on such an important and cherished facility for the families of sick children during a difficult and stressful time in their lives. Healthcare buildings have a traditional logic and function but often it’s at the expense of finding a humanising perspective. This design aspires to a far greater proximity between the two.”

Construction work has now commenced on site with the programme due to be completed by summer 2015. 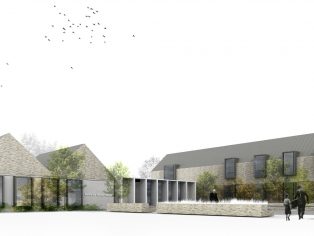