Leading architectural practice Keppie has been appointed to design a new office building for West Dunbartonshire Council on behalf of hub West Scotland.

The development, which will replace the current Garshake Road office, will be located on Castle Street in Dumbarton’s town centre. The project will utilise an existing Grade A listed façade which was formerly part of Dumbarton Burgh Hall and designed by renowned architect William Leiper in 1865.

Keppie has been instructed as design and landscape architects as well as interior designers for the new building, which will enable the Council to relocate staff from existing offices throughout Dumbarton and bring them together into one central location. The project reinforces the Council’s commitment to regenerate Dumbarton’s town centre.

“We are honoured to be designing such an important civic building for the Council. We will strive to create a state-of-the-art, energy conscious and efficiently designed office which we hope will be a great place to work.

“This is an important regeneration project for Dumbarton and the redevelopment of this site is a fantastic opportunity to integrate a sympathetic but contemporary solution into the existing urban context.”

The project has many components, including the restoration and conservation of a historical façade, the regeneration of a town centre site and the creation of a 21st century workplace that complements the Council’s agile working strategy. It will be sustainable and financially viable for public services for West Dunbartonshire to be delivered from.

Following completion of the final design and approval of all planning requirements, construction is likely to commence on site in autumn 2015 with completion expected in summer 2017. 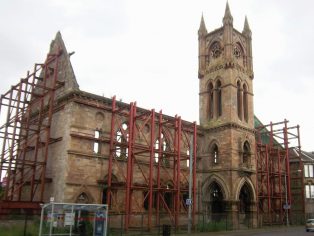