The Kingspan TEK® Building System has been installed as part of the walls and roofs of 185 new properties in South Gloucestershire, helping to form one of the UK’s largest “zero carbon” developments.

Hanham Hall features a range of one to five bedroomed properties centred around the refurbished, grade II listed Hall. Kingspan was involved from the initial design phase of the project and worked alongside HTA Design LLP, Barratt Homes and Sovereign Housing Association right through to the final detailing.  Kingspan TEK® Building System panels comprise a high performance insulated core sandwiched between two layers of Oriented Strand Board type 3 (OSB/3) and were designed and factory pre-cut to the project’s requirements by Kingspan TEK® Delivery Partner, Kingspan Timber Solutions.

“The key challenge at Hanham Hall was finding ways to ensure that the demanding requirements of the Carbon Challenge could be met consistently across the site. As such, we tailored the building designs to ensure complex details were designed out at an early stage. Specification also formed a crucial part of this process and we chose the Kingspan TEK® Building System both because of its high performance characteristics and its established track record in assisting projects reach the top standards in building performance.”

In a typical external wall construction, a vapour barrier was stapled to the external face of the Kingspan TEK® Building System panels followed by timber cladding fixed on battens. 30 mm thick Kingspan Insulation Thermawall TW55 was installed internally, helping to further reduce both heatloss and thermal bridging, followed with a service cavity and a layer of plasterboard. A similar build-up was also used for the roofs with 80 mm Kingspan Insulation Thermawall TW55 installed internally. Both wall and roof constructions achieve an A+ BRE Green Guide Summary Rating.

Kingspan’s British manufacturing facility, at which the Kingspan TEK® Building System panels are produced, carries FSC® and PEFC Chain of Custody certification. In addition, the blowing agent used in the production of the System panels has zero Ozone Depletion Potential and has a GWP of less than 5.

Hanham Hall was created under the Carbon Challenge initiative promoted by the Homes and Communities Agency. The flagship development features a number of community facilities including children’s play parks and cycle storage sheds; and  has been shortlisted for the ‘Housing Project of the Year’ Award at the 2014 Building Magazine Awards. 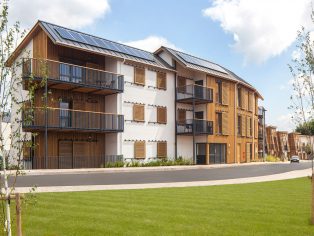 The Kingspan TEK® Building System has been installed at Hanham Hall, a flagship Carbon Challenge development.