The reputation of dining at garden centres is being turned on its head thanks to a new artisan café concept developed by London-based design consultancy Kiwi & Pom for the UK’s largest garden centre chain.

Coffee Ground has been rolled out to four trial sites at Wyevale Garden Centres around the country. Kiwi & Pom has worked on all aspects of the concept, from the physical design of the café spaces and the creation of a new brand, to art direction for the graphical elements such as illustration and hanging wall canvases.

The immediate success of the projects has already been recognised, winning the New Concept Restaurant category in the prestigious MIDAS awards (The Menu Innovation and Development Awards 2015).

With their pots of herbs, smell of freshly-roasting coffee and rustic food, the cafés and restaurants are a far cry from what is traditionally found in garden centres. The overall look is contemporary, drawing inspiration from the utility buildings found in gardens. Centrepiece to the design is a galvanised steel free-standing ‘shed’ clad with timber lapped boards. This works as a preparation area, servery and can also be used to display products.

As well as a functional space, the oversized ‘shed’ serves as an icon for the café, allowing it to be seen from a distance in large garden centres. Its distinctive shape has also been incorporated into branding and graphics. The structure of the shed is modular, allowing it to be constructed longer or shorter depending on the demands of each site.

The rest of the space is designed to be as flexible as possible, with the feel of a pop-up café. Kiwi & Pom designed bespoke moveable shelving units filled with potted plants, providing green walls to enclose the café space. They deliver greenery into the cafés and also bring customers close to the plants. Tables feature a mix of zinc and rough sawn oak tops which will weather with age. As part of the complete design concept, Kiwi & Pom also specified items including enamel tableware and created bespoke table numbers and signage with mini concrete bases. The Lloyd Loom and rattan chairs were sourced from Belgian manufacturers Vincent Sheppard. Outdoor versions are used in the exterior terrace spaces.

The food on sale reflects what is in season, offering simple fresh dishes such as home-made sandwiches, quiches, salads and cakes. Another innovative feature of Coffee Ground is the roasting throughout the day of organic coffee on the premises in small 1kg batches – they are the first to market with this concept in the UK. Meanwhile, a ‘closed loop’ approach means that the spent coffee grounds are used as soul nourisher for plants on sale in the garden centres.

“It is an artisanal café in touch with its garden centre environment.”

“There are strong coffee credentials, with a theatre of roasting at the heart of its operation. Micro-roasting is unique to this market which adds an important theme to operation and also fills the area with wonderful aromas.”

The hand-made feel is reinforced by the hand-painted wall illustration by Charlotte Trounce, which explains the coffee growing, harvesting and batch roasting process.

“When approaching the brief, our main observation was that the next big thing is for gardeners to grown their own food and it cook themselves.”

“We wanted to provide a sense of connection between the ingredients used in the food and the plants on sale in the garden centres. We aimed to create an oasis, allowing people to sit, smell the herbs, pause and be inspired.”

The first Coffee Ground café opened at Ivybridge in Devon, followed by sites in Hemel Hempstead and Beaconsfield. At Hemel Hempstead, the rear of the free-standing shed is covered in shelves and serves as a bookshop, with plants used as bookends. Kiwi & Pom is now working on a number of further projects for Wyevale. 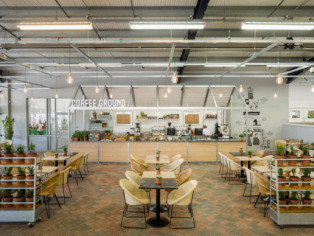