Constructed in the 1970’s in the Byker district of Newcastle upon Tyne, Byker Wall is regarded as one of the most significant pieces of architecture of its era in the UK.

As part of the £26 million refurbishment scheme on this Grade II listed residential estate, which features a continuous block of over 600 properties, work was performed to not only repair the existing roof but to bring Byker Wall to the forefront of modern-day roofing technology with the installation of a state-of-the-art photovoltaic (PV) system.

Prior to undertaking any remedial work the project team had to first get permission from the local planning authority, due to the building’s protected status. Once approved the first phase of work began in 2014 to remove the original asphalt roofing, which had exceeded its serviceable life and been experiencing water ingress. As part of the required works the team had to convert the pitched metal roof back to its original flat roof status, which was achieved by removing the profiled metal sheets and supporting timber framework that had previously been installed. All of the original waterproofing was replaced with 4,500m2 of Bauder’s top quality reinforced bitumen system, BTRS, which has a life expectancy in excess of forty years, and included a highly efficient 120mm PIR insulation to achieve the required U-value and satisfy building regulations.

Four of the ten housing blocks were then fitted with 132 PV Modules, enabling Byker Wall to generate at least 39.6 Megawatt Hours of solar power each year. The PV system was installed using a welded membrane-to-membrane technique so that there was no penetration of the waterproofing or roof deck, ensuring the integrity of the roof is completely upheld. The remarkable simplicity of the installation also meant that Bauder approved contractor Hodgson Sayers could install the entire PV array in a matter of days to the exact specifications given by the client.

One of the major challenges for this project resulted from the district heating pipe, which runs the entire length of the roof but its exact path was unknown until the pitched metal roof was removed. This meant that many design revisions were necessary for the PV layout and because the pipe penetrates the roof, the roofing contractor had to come up with innovative ways to temporarily support the pipe during the waterproofing installation. In addition, all residents remained in-situ throughout causing logistical challenges, however deliveries were timed as not to conflict with vehicles moving in and out of the facility and the team worked closely with residents to agree working hours.

Creating sustainable employment was another important requirement of the project brief. In response, Hodgson Sayers created an apprenticeship programme that used Byker Wall as a starting point for employment, guaranteeing full time work at the end of the apprenticeship. As a result, four new recruits were accepted on to apprentice schemes. From a learning perspective, the complicated nature of the works made for an ideal learning environment for the cohort of apprentices providing them with an invaluable opportunity to work on a truly iconic building.

All phases of the work were completed on time and to budget in December 2015, much to the delight of all project stakeholders, including Kevin Scott, Property Services Manager for Your Homes Newcastle,

“Byker Wall is an exceptional example of how modern roofing technology can help revive a historical landmark. Bauder’s PV system was chosen for its aesthetic impact, penetration free installation, impressive performance credentials and compatibility with the waterproofing. Bauder and approved contractor Hodgson Sayers delivered a roofing solution of the highest quality giving us total confidence in the future performance of the roof on this Grade II listed residential estate.” 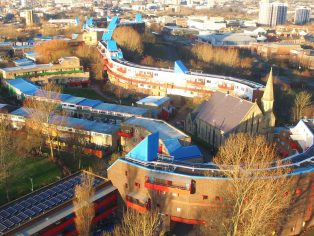 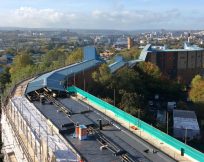 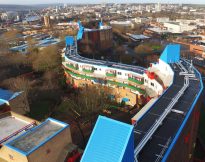