A glowing egg wrapped in a transparent glass screen forms the centrepiece of the new headquarters of the EU Council in Brussels, but this innovative building is about much more than showy architectural bravura. Stephen Cousins reports.

Whoever emerges victorious in the UK’s general election this June, they will shortly afterwards find themselves in the Europa building, the new headquarters for the Council of the EU in Brussels, where the bulk of Brexit negotia- tions will play out

The controversial project, previously criticised by David Cameron for its inflated £300m+ budget, features a bulging egg- shaped structure that will glow at night like a lantern, wrapped in a huge glass atrium with a patchwork of over 3,000 reclaimed timber window frames.

The design was developed – by Belgian architecture studio Samyn and Partners, Italian architects Studio Valle and British structural engineers Buro Happold – to symbolise everything positive about Europe: unity, transparency and diversity. At its heart is a huge room with kaleido- scopic rainbow carpets and ceiling tiles, designed by Belgian artist Georges Meurant, where EU leaders will hold summit meetings.

At first glance, the building might appear excessive or flamboyant, but its design was a logical response to the constraints of the brief, says Philippe Samyn, director of Samyn & Partners:

“The project is not the consequence of a wish to be original, or an act of bravura. It had to be eye catching but not at the expense of unnecessary materials, and its shape was fundamentally generated by the constraints of the programme.”

The Europa building began its journey in more stable times, before David Cameron first mooted the idea of an EU referendum, when the Greek economy was still booming and there were few concerns about migration across Europe’s borders.

The 53,815 m² project was needed to increase capacity for members of the European Council and the Council of the European Union, after 10 new member states joined in 2004. It will be used for summits and over 6,000 meetings a year, attended by hundreds of Ministers, diplomats and interpreters.

The scheme involves the renovation and extension of the existing Europa building, an L-shaped block designed by Swiss architect Michel Polak as a high-end apartment complex, completed in 1927. The building was later commandeered by the Nazis as a headquarters then, after the second world war, it was purchased by the Belgian government and converted for use as offices.

The egg-shaped lantern fills the void in the L-shaped plan and is self supporting. Due to constraints imposed by the Metro and trains that run underneath the site, the steel structure of the atrium facade is designed to be lightweight and bear the weight of both the outer patchwork of windows and the atrium roof. The structure comprises a number of large trusses and acts as a bridge.

Other constraints imposed by the site include a heritage listing on the original building’s facades, entrances and the central ground floor, which limited further interventions. The new headquarters is adjacent to its old home, the Justus Lipsius built in the 1980s, and connects to it by two footbridges.

The lantern is symmetrical in plan and includes 11 occupied floors that vary in size depending on the specific requirements of each programme. The largest conference space, on level five/six, mid-way up the structure, can accommodate 250 people. Two smaller conference rooms are located at levels three/four and seven/eight. There is a cafeteria on the ground floor, a press room, on level one/two. There are several dining rooms, the largest is on level 11 with capacity for 50 people.

Samyn comments: “When we analysed the number of square metres needed for each floor of the building and saw that it increased gradually, from the bottom to the middle, then decreased again towards the roof. That was the genesis of the idea for the lantern shape. The circular form is ideal for meeting rooms, where people gather to talk, and preferable to a rectangular space that sets up a hierarchy.” The floors are stretched slightly into ellipses, rather than perfect circles, due to site constraints.

The transparent atrium facade wraps around the entire northeast corner of the site and incorporates some 3,750 recycled oak window frames, sourced from renovation or demolition sites across Europe, including a castle in the UK and a farm in Italy. This “harmonious patchwork” is based on a special algorithm developed to match units of different sizes together to form the overall design.

A second layer of glazing, located 2.7 metres behind the windows, cuts the impact of noise from the adjacent road, and boosts thermal insulation as part of an ‘onion’ strategy for energy performance.

The facade comprises four separate layers: the atrium facade has an outer and an inner single glazed layer, the lantern has an outer laminated glass layer and internal layer of solid insulated wall.

“Multiplying the number of envelopes made it simpler to achieve interior temperature targets and was cheaper to construct than a single highly-insulated facade,” says Samyn.

The ‘onion’ strategy forms part of a deep- rooted environmental approach that responded to the EU Council’s desire to see sustainability displayed in many aspects of the architectural and technical design.

Samyn has some strong views on environ- mental assessment ratings:

“Commercial sustainability ratings, like BREEAM and LEED, are quite crude instruments created for developers and people who want to say they are sustainable.” He adds: “We are dealing with a serious architectural building, not a showcase for developers, so we go much further.”

According to the architect, sustainable thinking should always begin with a focus on “reasonable drawing”, and designing with common sense and normal proportions in mind, rather than resorting to “absurd” architectural gestures, like large overhangs or twisting forms.

An emphasis on the use of natural materials includes exposed oak wood floors, in the main meeting rooms, the foyers and all office spaces. Meeting room floors are partially covered with a multicoloured natural wool carpet, needed for acoustic reasons; finishes on the walls and ceilings are made of woollen textile felt.

The facade features ultra-clear glass windows, with a very high Color Rendering Index to maximise daylight levels. This is coupled with high levels of external shading to minimise solar gain. A total 374 low- energy LED luminaires are installed to light the curved surface of the ‘egg’ at dawn and dusk.

Renewable technologies include rainwater- flushing toilets and a photovoltaic “umbrella” on the roof that will provide about six per cent of the total power require- ment, as well as create a naturally ventilated and sheltered external space.

Six percent might sound low for a PV installation, but Samyn says it was tough to achieve given the building’s high energy demand from equipment and computers, which he compares to a high tech factory. The PV array covers both the modern and the historical parts of the building and symbolises the link between the present, the past and the future.

The new EU headquarters was originally scheduled for completion in 2012, but a series of delays, related to the project schedule and wider political issues, pushed back the opening to January of this year.

The main issue was the enforcement of the Lisbon Treaty, in December 2009, which resulted in programme modifications, such as new security
measures, construction adaptations and building permits. In addition, unexpected levels of asbestos in the existing building had a knock on
effect on removal work.

“You do wonder whether these institutions actually get what every country, what every member of the
public, is having to go through as we cut budgets and try to make our finances add up,” he said in a press conference.

However, Samyn & Partners contends that theoretical increase in cost is in fact the result of indexation, an economic mechanism that sets a cost-of-living index to theoretically remove the detrimental effect of inflation. It also claims the building was delivered in line with the
cost of an equivalent corporate HQ.

To some, such concerns might seem trivial, especially given the scale of the €100 billion Brexit “divorce bill” now being mooted by EU leaders. And there’s little denying the important role the Europa building will play, over the coming months, as an arena for politicians to wrangle over Britain’s future relationship with the EU 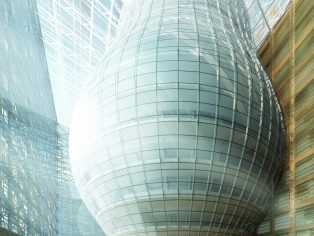 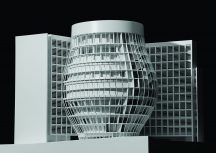 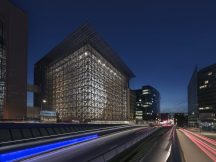