Battersea Power Station Development Company (“BPSDC”), on behalf of the shareholders of Battersea Power Station, has announced that London 2012 Olympic Park designer LDA Design has been appointed to develop the landscape design proposals for the second phase of the 39-acre development. Working as a consultant to LDA Design, Andy Sturgeon Landscape and Garden Design will create three unique roof gardens on top of the iconic Power Station.

The landscape architecture for the second phase of the London development site, by multi-award-winning LDA Design, will involve the creation of a new park and public realm connecting the Power Station to the Thames riverside promenade. The park will feature large event lawns, terraced river gardens and will form a highly flexible multi-programmable space for use throughout the year in all seasons, open to the general public.

The work will also feature a new sunken piazza at the southern entrance to Gilbert Scott’s Power Station and the creation of a reflecting pool around its base, designed in conjunction with Exterior Architecture.

The team at Andy Sturgeon Landscape and Garden Design will be designing and producing three spectacular gardens on the new two and a half acre roof of The Power Station. As one of the world’s leading landscape and garden designers, Andy Sturgeon’s contemporary creations are widely admired for their timeless architectural qualities, innovative planting and sculptural characteristics.

“Following on from our successful work on the first phase, we are delighted to have been appointed to develop the second phase of the Battersea Power Station development, working alongside Wilkinson Eyre, the specialist architect for the transformation of The Power Station, and landscape and garden designer Andy Sturgeon.”

Prices for the new homes will be released in April. The launch of the properties will be held in London on 1st May 2014. Prospective occupiers should register their interest at www.batterseapowerstation.co.uk or by telephone: +44 (0)20 7501 0678 or email: sales(Replace this parenthesis with the @ sign)bpsdc.co.uk. 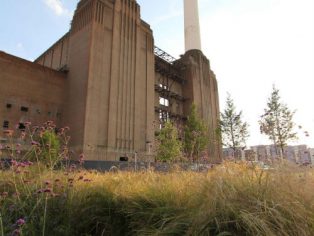