It is a fact that inadequately ventilated and tightly sealed properties can suffer from mould and condensation, leading to problems for the occupiers. A block of flats in south London was once such a building where extreme condensation and mould had taken a grip – not only leading to unsightly damage to internal walls, but also threatening the fabric of the building and the health of the residents.

The situation was saved with the installation of Johnson & Starley’s LE 155 ventilation systems with heat recovery.

So extensive was the problem that mould was affecting all the rooms in many of the flats – around the windows and doors, on the ceiling and near the central heating boiler. Mould was also attacking all the soft furnishings as well as clothes in drawers, wardrobes and suitcases. So poor was the indoor air quality that on occasions residents had even resorted to wearing paper masks to help alleviate breathing problems – a particular problem for the elderly and the very young.

“It was so bad that when we took clothes out of the wardrobe or the drawers in the bedroom, they would smell of mould or would have mould on them – even though they were clean when they were put away.”

A solution to the problem was proposed by a local plumber familiar with Johnson & Starley’s heat recovery ventilation units and the success they had achieved eradicating mould and condensation in other properties of this type.

The flats were surveyed by Dean Jones of Surevent, a regular installer of Johnson & Starley systems. He recommended the installation of LE155 ventilation units with heat recovery. Not only does the LE155 ventilate the property, but it also removes cooking smells and other pollutants from the air – all with minimal heat loss. The units are designed to be installed conveniently on walls, in cupboards or above cooker hobs, with the addition of the optional cooker canopy.

The installation of an LE 155 unit in each flat took just one day with minimum disruption to residents. The ductwork is encased and hidden from sight providing a totally unobtrusive installation. In operation, stale, moisture laden air is extracted from the bathroom and kitchen area, via the LE 155’s cooker canopy, or via grilles within each room. The cooker canopy also removes any moisture or smells directly from the kitchen generated through cooking.

Then, via the hidden ductwork, the moist air is taken back into the LE155 unit. This removes the moisture and any smells generated by cooking. Within the unit, the air is passed across an aluminium heat exchanger to remove the heat and residue. The stale air is then exhausted outside the building through an external grille. Fresh filtered supply air, with airborne particulate removed, is drawn across the heat exchanger and the tempered air is redistributed back into the apartment through grilles into dry rooms , including the lounge and bedrooms.

The LE155 units are SAP Appendix Q listed and incorporate energy efficient EC Fans. The remote dual control switch can be set to boost when the occupants are creating more moisture by cooking or bathing. Another energy saving feature is that the LE 155 can be set to “extract only” in the summer so that they do not unnecessarily pre-warm the incoming air.

It was not long before the benefits of the LE 155 units were being noticed. The mould in the properties disappeared and there was no need for extensive re-decoration. Clothing, curtains and soft furnishings no longer smelled of damp and mould, whilst the tenants’ health issues also started to clear up.

“My flat has been mould free now for over 18 months and I can dry my washing on a clothes horse or over the radiators in the flat without any worries about damp. A big plus is that we don’t have to sit watching television with paper masks on anymore!”

Surevent services the LE 155s to keep them in tip top condition and not only are the tenants happy but the landlords are also very pleased with the results too. For more information contact: 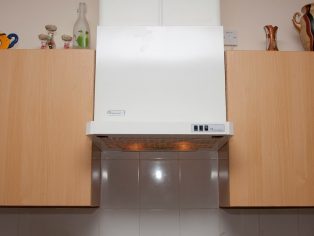