To mark its 20th edition this year (17 – 20 September 2014), 100% Design hosted a celebratory dinner at Heal’s Tottenham Court Road last night, attended by some of the best and leading names in the UK’s design and creative industry. Show Director, William Knight was joined at the dinner by the likes of Max Fraser, El Ultimo Grito, Chrystina Schimidt of Skandium, Michael Marriott, Gareth Williams and Paul Cocksedge, all of whom have participated and contributed to 100% Design’s success in the last 20 years.

“We were delighted to see all the familiar faces – the designers and those who were or have been part of the 100% Design history – come together and celebrate this significant milestone with us. The show has achieved so much in the last 20 years, from starting as a boutique UK design show to now becoming an international event in the design calendar with an extensive global reach.

“Despite the scale increase over the years, 100% Design stays true to its long-standing commitment to design, innovation and quality, and continues to offer an unrivalled platform for aspirational design brands as well as emerging young designers to showcase their talent and creativity. 100% Design 2014 will celebrate the history but also look ahead to see where design will take us in the next 20 years, and we are confident that the show will be one of our best shows yet.”

In partnership with Kingston University and the Design Museum’s MA Contemporary Design programme, a series of encounters have been curated by The Concept Lounge to celebrate the show’s 20th edition. To kick start the series, selected students from the MA programme along with 100% Design, gathered stories and ideas from attending guests at last night’s event, and the collected materials will be contributed towards a special timeline feature at the 2014 show.

100% Design remains a leading global design show and continues to attract a record number of national and international visitors year-on-year. First staged in 1995 within a tent off King’s Road London, 100% Design has gone on to become the benchmark event for promoting design excellence and creativity, both within and outside the UK. The 2013 show attracted over 27,000 visitors, an increase of over 7.5% compared to the previous year. Since the show’s acquisition in 2011, new owners Media Ten have also increased footfall by 33%.

Continuing its role as a driving force of creativity, 100% Design 2014 is set to celebrate its 20th edition this September whilst looking forward to the future of design.

The new creative campaign, designed by show designers Thomas Matthews, brings to life designs through a series of kaleidoscopes that represent the five key zones of the show – Interiors, Workplace, Kitchen and Bathroom, Eco, Design and Build, and Emerging Brands. The existing website has also been given a fresh new look with enhanced layout and visual features.

Following on from the success of last year’s show,100% Design 2014 will once again take over both Earls Court 1 and 2 (totaling 20,000m2), characterised by a solid framework of the five distinctive zones. Each zone (except Emerging Brands) will feature a prominent, specially commissioned installation, reinforcing the idea of a working community and ensuring a greater number of useful connections during the show. Emerging Brands, a melting pot for new design talent, will return this year alongside a dedicated section for International Pavilions – an exciting space featuring an array of inspiring designs by creative practices from around the world.

Confirmed exhibitors for 2014 (to date) range from international design brands including Boca do Lobo, Bridger and Buss, Delightfull, Casala, Boss Design, Bulthaup and Wagner, to young designer makers such as Hanna Francis, Naomi Paul and Desinere.

The 100% Design 2014 Talks programme and key features will be announced shortly. 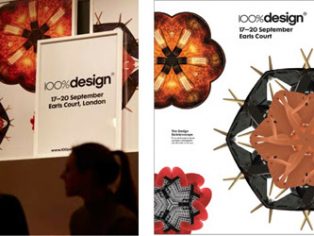