Leeds Beckett University in conjunction with their development Partner Downing Developments has unveiled designs for a new £75 million Creative Arts Building designed by Hawkins\Brown. Plans submitted for the 14,500sqm scheme will provide an iconic home for academic, creative and cultural activities in the civic heart of Leeds, becoming a stand-out landmark site for the Northern Film School, Music, Performing Arts and Fashion students. The project aims to attract new audiences and facilitate dialogue between the University, its partners and the wider city.

The proposed building forms a major part of the University’s £200m campus development plan, which will be delivered over the next five years.

The Creative Arts Building will be home to 1,850 students and staff, who are currently spread across various separate locations in the city. Assembling the different courses under one roof will create an inspiring artistic and cultural hub, allowing the University to enhance the transferable skills and employability of their students through bespoke specialist facilities and collaborative social learning spaces.

“The Creative Arts Building will reflect the creativity, inspiration and dynamism of the subject areas for which it will be an exciting new home.”

“Leeds Beckett University contributes to the city and our region, both academically and economically as a respected employer and vital economic driver for the City.”

“The new Creative Arts Building provides a welcoming creative hub that will encourage new collaborations between courses and enable the university to engage with the wider society to form an innovative cultural dialogue. The aim to create spaces for students, staff and visitors to interact and learn from each other was key to Hawkins\Brown’s design approach on this project.”

“The building will become a landmark physical site for Film, Music, Performing Arts and Fashion; in addition it will become a space for new audiences and city dialogue. It will have the ability to inspire learners, engage new audiences and positively impact the lives of students, staff and visitors who share the building. In doing so, it will inspire a new collaborative practice of the arts.”

“We are excited to be working with Leeds Beckett again, building on the success of the partnership that delivered the award winning Broadcasting Place development.”

The new Creative Arts building, located at the edge of the Civic Quarter of Leeds, occupies a prominent site 10 minutes’ walk from the main cultural and retail amenities of the city centre. It is the final phase of delivery of a Downing masterplan, a 500,000 sq ft development that most recently delivered the Cityside student accommodation scheme. With Leeds General Infirmary to the West, the site is clearly visible from Millennium Square and is directly opposite the listed Civic Hall to the East.  Careful integration of the proposals into this historic setting has been the subject of extensive consultation and liaison with the Planning Department.

The scheme will offer extensive state-of-the-art facilities including a 186 seat theatre, an 84 seat studio theatre, a 216 seat cinema, recording studios, TV studio and film studios, as well as numerous other diverse teaching and breakout spaces.

The entrance foyer is designed as a welcoming, open space, accommodating a 4.5m level change across the site with a feature staircase that connects the publicly accessible areas of the building. An atrium that rises up to the fifth floor is animated by projecting social learning spaces, writing sheds and conversation dens. The lower floors of the building house the theatre, triple height TV studio and a cinema.

The complexity and richness of the building’s brief has generated an approach to the building’s envelop expressive of the activities within, whilst creating a coherency to the whole building form and language. A façade palette of stone, bronze coloured anodised metal cladding and translucent polycarbonate cladding is appropriately civic responding to the listed structures in the immediate context of the Civic Hall. To Portland Way and Calverley Street the façade acts as a framework communicating the activity and creativity within. In other locations the playful patterning reflects the rich mix of technical uses of the interior.

Subject to planning, works on site will begin end of 2017, with completion estimated to be in 2020. 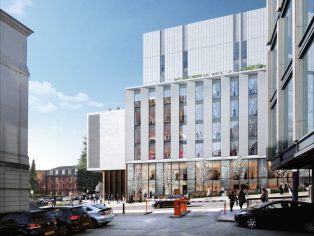 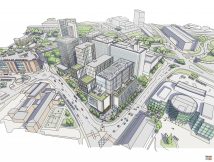