London Aquatics Centre Opens to the Public in March

The London Aquatics Centre will open to the public on 01 March 2014 offering swimming and diving lessons to all ages and abilities, as well as a variety of fitness and family sessions, water polo, synchronised swimming, diving, triathlon, sub aqua, gym and dry diving facilities.

Glazing along either side of the Aquatics Centre has replaced the temporary stands used during the 2012 Olympic and Paralympic Games.

With a 2,500-seat capacity for spectators, the Aquatics Centre will continue to host national and international events including the FINA/NVC 2014 World Diving Series and 2016 European Swimming Championships.

‘After a post-Olympic makeover, London’s majestic aquatics centre is now flinging open its doors for everyone to enjoy, whether an elite athlete or enthusiastic amateur. All of the world class sporting venues on the magnificent Queen Elizabeth Olympic Park have secured bright, futures, dispelling fears of white elephants and helping to drive our ambitious regeneration plans for east London.’ 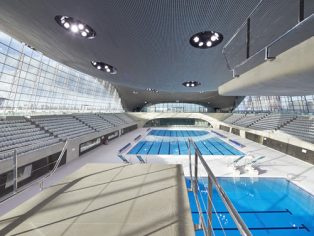