The London Festival of Architecture (LFA) is calling for participants to explore and engage with the changing landscape of London through this year’s central theme, ‘Work in Progress’.

Work has shaped our city and informs our lives. It connects London socially and globally; it is the means by which we share and test ideas, and often where we have our greatest successes and challenges. London exists because of its commercial roots, as a place of production, the exchange of goods and services.

Yet how we work – and how we think about work and the workplace – has changed dramatically in recent years. Technology, alongside other cultural and economic forces, has enabled work to seep out from offices to permeate our entire city, influencing its landscape and impacting on our experience of daily life.

Landscapes have changed, too, due to the decline of traditional industry and manufacturing, while many of the remaining sites are now under pressure for much needed homes. Yet now we are seeing a resurgence of manufacture, and a return to artisan and making.

London itself is a work in progress, and its architecture, and its architects, both respond to, and lead, the process of change. This year’s theme ‘Work in Progress’ presents a chance to explore the changing nature of work, and workspace, as well as its impact on, and role in, the continued evolution of our city.

Proposals are being invited for Associated Projects and Open Studios, in partnership with RIBA London. The deadline for submission is 10 March 2015. Selected projects will be included in the London Festival of Architecture programme, alongside events by London’s leading cultural and academic institutions.

Patricia Brown, Chair of the London Festival of Architecture, comments:

“London exists because of its commercial roots, and work and London go hand in hand. Work – aka career – is why many of us chose, or continue, to live in London. So this year’s festival theme of ‘Work in Progress’ is a route into exploring the impact of work on our lives and city, and especially the role of its architects and architecture in informing and influencing London’s evolution.”

In response to the growing international leading role played by London, LFA is expanding its international programme for 2015. This will centre on a number of key events, including Spanish architects SelgasCano’s design for the Serpentine’s 15th annual pavilion; an international conference marking the 50th anniversary of the Commonwealth Association of Architects (CAA) and hosted by the Royal Institute of British Architects (RIBA); and the introduction of an international Focus Country.

To further support the development of the international programme, LFA is introducing this year a country focus – the inaugural Focus Country will be Ireland, presented in partnership with Irish Design 2015 and the British Council. Irish Design 2015 (ID2015) is a year-long initiative backed by the Irish government exploring, promoting and celebrating Irish design throughout Ireland and internationally. A programme of workshops and events will extend to various areas of LFA and will present the first instalment of ‘New Horizon’, a multi-platform exhibition as part of ID2015 presenting the work of emerging Irish practices, selected by curators Raymund Ryan and Nathalie Weadick.

Returning for 2015, the much-anticipated Headline Talks programme will be hosted by leading institutions such as the Royal Academy of Arts and RIBA; London’s leading architectural universities will present their degree shows, offering an overview of our future generation of architectural talent, and RIBA London’s tremendously popular Open Studios programme will also be back, running across the capital during the month of June 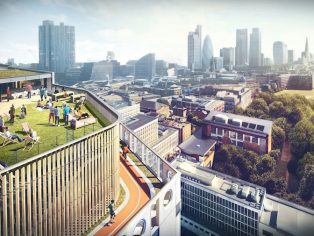