The London Festival of Architecture (LFA) and Architecture LGBT+ have announced the nine architects shortlisted to design a float – generously sponsored by Sir Robert McAlpine – to represent architecture and LGBT+ architects at Pride in London on 7 July 2018.

The competition was open to architecture students, recent graduates and emerging practices, as well as representatives from London’s more established firms, and is intended to demonstrate a clear commitment to supporting LGBT+ architects and celebrate the hugely important role they play within the profession, London and beyond. Forming a key part of the London Festival of Architecture 2018’s exploration of ‘identity’, the resulting proposals each form a unique and colourful celebration of architecture and LGBT+ architects.

The nine shortlisted teams and designs are:

The London Festival of Architecture enjoys a close partnership with Architecture LGBT+, having supported the launch of the network with a pre-Pride breakfast at the RIBA in 2016. Since then the LFA’s “See the Elephant” campaign, launched at MIPIM this year, further demonstrates the festival’s determination to promote diversity and empower individuals and organisations across the built environment professions.

The Architecture Pride float competition was judged by an expert panel including:

The winning team will be announced on 27 June and awarded £8,000 to construct their proposed float design ahead of this year’s Pride in London Parade on 7 July.

“We have had a fantastic response to our competition for an architecture float at Pride in London. The shortlisted entries are a brilliant showcase for LGBT+ architects in London as we celebrate ‘identity’ in 2018.”

“Architecture LGBT+ is all about raising the visibility of LGBT+ architects, and there can be few better platforms to celebrate them and their work than at Pride in London.”

“We intend to lead by example on equality and diversity in order to inspire positive change across the industry. We are proud to support this competition by London Festival Architecture and Architecture LGBT+, and we applaud the shortlist of designs that truly celebrate those inclusive values.” 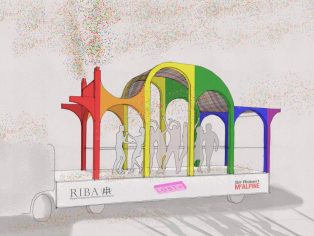 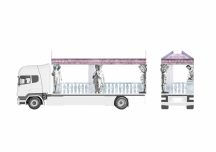 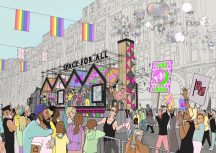 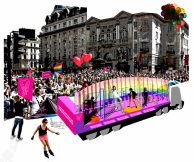 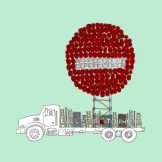 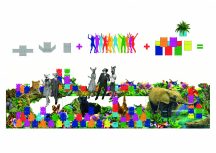