London Festival of Architecture May highlights

With 69 Partner events, 82 Associated Projects and 62 Open Studios, the London Festival of Architecture (LFA) presents a programme that will put architecture on the map throughout the month of June, celebrating the evolving nature of work and the workplace, and paralleling the diversity and vision found in London.

Keynote talks and debates will tackle key issues central to this year’s theme. From debating how policy and design can encourage creative place making (8 June, Cultivating Creative Cities), looking at international case studies of industrial rejuvenation (18 June, The Working City – Eindhoven, New York and London), charting the past, present and future of the work space, and its impact on social behaviour (22 June, The Changing Faces of Workspace) to looking at the role of arts centres in today’s challenging landscape (29 June, Come Together: Reinventing the Arts Centres), these debates will underpin LFA’s key role in advancing the position that architecture plays in place making.

Google, together with Cloud Arch Studio presents The Future of Work (22 – 30 June), an interactive exhibition currently being designed in Mountain View, California. For LFA, key elements of the exhibition will be previewed in London’s own Google Campus. The interactive display explores what the workplace might look like in 2020 as the result of dynamic progression in technology, architecture, culture and our urban environment.

Founding partner New London Architecture (NLA) presents Public London: Ten Years of Transforming Spaces (23 June – 11 July) an exhibition tracing the past decade of public space, celebrating the best projects and initiatives. Simultaneously, Never Mind the Bollards (23 April – 11 July) an installation exploring public space in London in the South Crescent outside the Building Centre, aims to put the focus on the concept of public space and its uses.

The Royal Academy of Arts will present its celebrated annual Summer Exhibition (8 June – 16 August). Now in its 247th year, the Summer Exhibition is the world’s largest open submission show of contemporary art and architecture, and for 2015 it will continue its tradition of showcasing the work of both established and emerging architecture practitioners.

Other exhibitions include Where London Works, a celebration of the vibrancy of the increasingly undetermined industrial economy in the middle Lea Valley, by Cass Cities (13 – 20 June), and Reinventing Oxford Street by New West End Company, which looks at the dramatic changes to London’s prime shopping district brought by Crossrail.

Designed to explore how our constantly developing working culture has influenced the concept of the workspace, Not to Scale Collective will present Working in the Third Place (1 – 30 June, multiple venues). Coffee shops are increasingly becoming workshops and hubs of creativity. Their new role in everyday working life will be explored throughout the month, culminating in the launch of an online exhibition platform to coincide with LFA’s finale.

Together with homeless charity Shelter, Catja de Haas and Lala Thorpe of Artescape present the Giant Dolls House Project (1 – 10 June) at Old Street’s Shelter Café. This collaborative installation will consist of individually made shoe-boxes, which visitors can contribute to, creating an evolving miniature neighbourhood that will expand and change throughout LFA. This is an on-going project that intends to both reflect the way in which communities develop and grow, and the desperate need for housing in the city to support the home’s growing role as a work place.

Clerkenwell showroom Sto Werkstatt, in collaboration with HASSELL and Draisci Studio, will present Hypnos: The Architecture of Sleep (19 May – 30 June), an immersive installation that will explore the benefits of inactivity. Eight coloured sleeping pods made from strips of felt and suspended from the ceiling of Sto Werkstatt’s main gallery space will provide participants with a secluded space to rest and enjoy inactivity, peppered with subtle interventions such as comforting smells and whispered stories.

A year-long collaboration between Bartlett Unit 3 & Global Generation titled Making a Community: The New Skip Garden (1 – 30 June) will result in a working community garden in the middle of the King’s Cross Development Site. The installation will consist of 12 working semi-permanent structures – designed by Global Generation and built by Bartlett undergraduate students – including a kinetic roof, a greywater filtration landscape and a twilight gardening space.

London Transport Museum will hold two events as part of the Festival. In Holden Goes West (13 & 20 June, 2 – 5pm) Museum guides will take to the Piccadilly Line to lead participants on a tour of the stations that exemplify British Modernism, and incorporate concepts developed by architect Charles Holden in the 1930s. The Museum will also host a talk on London’s First Skyscaper (9 June, 6.30 – 8pm) which will centre on London Underground’s head office – the city’s first skyscraper. Designed by Charles Holden and opened in 1929, today the building holds the same level of architectural heritage protection as St Paul’s Cathedral and the Houses of Parliament.

A sponsor of this year’s Festival, The Berkeley Group will lead a tour to see the newly unveiled sculpture by Hamish Mackie – of six life-size bronze horses galloping through this Berkeley development – in On Site at Goodman’s Fields (26 June, 1 – 2.15 pm). Its second tour, On Site at Woodberry Down (9 June, 6.30 – 8pm) will visit one of the biggest estate regeneration programmes in Britain that will create 5,500 new homes over 20 years, and hear from Fletcher Priest Architects and social entrepreneur Simon Donovan on how the community is evolving after six years on site.

Nine Elms on the Southbank has scheduled a full programme of activity for the Festival, including walking tours that visit landmarks such as Battersea Power Station and the new Damian Hirst Gallery on Newport Street (13 & 16 June, 11am), a panel discussion at Brunswick House (26 June, 6 – 8pm) and an architecture themed pub quiz in partnership with The Londonist (18 June, 6.30 – 9pm).

London School of Architecture will host a talk at revolutionary co-working space Second Home (designed by SelgasCano) titled How Does Creativity Happen? (3 June, 7pm). The talk will look at innovative models for the office and the university, and will explore how different working patterns can be accommodated in an ever changing, technologically advanced London.

Director of the Architecture Foundation Ellis Woodman together with Louise Wyman, architect and Ebbsfleet UDC Masterplanning Director, will present Ebbsfleet Garden City: A Work in Progress (16 June, 6.30 – 8.30pm). The talk will explore the ways in which this project can engender new design processes and approaches for creating high quality and ambitious places. 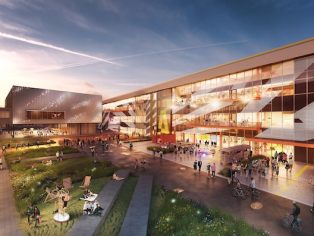 Here East, the new creative and digital cluster being developed on the Queen Elizabeth Olympic Park, is one of the case studies explored in ‘The Working City: Eindhoven, New York and London’ talk (18 June)