The modern lines of the Lugano flag paving from Brett Landscaping have created an impressive exterior to the prestigious Royal Southern Yacht Club in Hamble, Southampton.

Established in 1837 and with a long line of royal patrons, the yacht club moved to the Hamble in 1934 and has since created a contemporary yet sympathetically-designed club house.

The large area surrounding the club is being used as an entrance to the club house itself, an outdoor seating area, and a walkway to the pontoons. As the first feature visitors see on arrival at the yacht club, it was imperative that it mirrored the high quality of the rest of the development.

“Our aim was to create a clean, comfortable area in which our members and visitors could relax, whilst still maintaining an impressive club house entrance and a practical pathway to the pontoons.”

“Our brief was to improve the external space for the Clubhouse with creating an elegant terrace area which would be suitable for future events at the yacht club.  After consultations with yacht club members on the different design options from fluid to more formal, it was decided to go with the final scheme resulting the simple, contemporary terrace which addresses the relationships with the Hamble Conservation Area.

“After researching various suppliers, we decided to work with Brett.  They have been extremely east to work with and their product knowledge is second to none.  The location required sustainable materials, robust enough for the coastal environment whilst providing aesthetic value.

“Brett also provided us with product samples, allowing us to see how the different style of paving would work in situ.  We decided to use the newly launched Lugano due to its simple elegance, naturalistic feel, and choice of colours, which allowed us to distinguish between the terrace and the walkways.”

The Lugano flag paving range helped to create the required modern, elegant, and clean space around the yacht club.  With a high level of slip resistance, helping to keep visitors safe, as well as exceptional durability, Lugano also met the functional requirements in an area with a high level of pedestrian traffic.

Over the 600m² area a combination of both Silver Grey and Graphite Grey Lugano paving has been used.  The light Silver Grey is the predominant colour covering the majority of the area producing a light and spacious feel, whilst the darker Graphite Grey has been used to denote walkways as well as creating a striking contrast to the rest of the terrace.

The installation was completed by Hampshire-based Raymond Brown Construction, who confirmed:

“The paving solution provided by Brett Landscaping was the best choice for this project, both for its appealing aesthetics but also for its robustness and anti-slip properties which are both imperative in an environment such as this.” 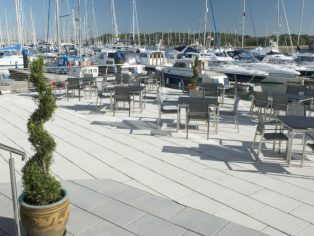