Maber works on visitor centre fit for a king

The project, delivered for Leicester City Council, saw the former Alderman Newton’s School on St Martin’s Place transformed into a state-of-the-art visitor centre telling the dramatic story of the king’s life, his brutal death at Bosworth Field in 1485, and the fascinating rediscovery of his grave.

The Victorian Gothic school building was refurbished to create two floors of exhibition space and a new covered area allowing visitors access to the grave in which Richard’s remains were discovered. The project includes the construction of a new courtyard garden, glass entrance hall, viewing balcony, café and visitor entry from Peacock Lane.

“We carried out a sort of historical ‘dot to dot’ to encapsulate what was already on the site. We had to build over the grave of a former king of England – which is obviously a very unique project for Maber.

“As the site is an area where there had been an extensive excavation, we had to be mindful of the soft ground and the surroundings of the grave. This was a really high profile project for ourselves and other consultants working on the site. It was quite a complex operation and there are lots of aspects to take into consideration.

“We had to carefully consider how to design and build the centre over an area which has been extensively excavated with the potential for collapsing ground. Archaeologists created trenches and bridges to find the grave and we had to take this into account.”

The £4 million King Richard III Centre includes elements of renovation and new build and will be an informative experience for visitors following the dramatic story.

The centre is likely to attract 100,000 visitors a year and bring in more than £4.5 million to the local economy in the first year – and benefit the wider East Midlands.

The centre will include the King’s grave, a reconstruction of the monarch’s head and also a 3D print of the King’s remains. The site includes exhibition spaces, a function room, courtyard, shop and café.

“We’ve got some really nice subtle references to the medieval site where the centre stands. For example, the courtyard is in Herrick’s garden and some of the exhibition spaces will form what was the choir of the Greyfriars abbey.”

“I am delighted to say that the result of Maber’s work at the former Alderman Newton’s School is absolutely stunning.

“Maber have been very sensitive to the historical needs of the building, but at same time have ensured we have a modern visitor centre which is fit for purpose, and provides a world-class visitor experience.”

The project was delivered through the empa framework. Head of empa Alan Coole said:

“This is a project which will transform an existing landmark building into an outstanding visitor centre – attracting people from the whole country and from across the globe.

“This is a new centre which will stand tall as a flagship visitor attraction for the region of which Leicester City Council can be truly proud.”

King Richard III’s death marked the end of the Middle Ages and this is a tremendous archaeological find, which should provide a great boost to Leicester’s visitor economy. 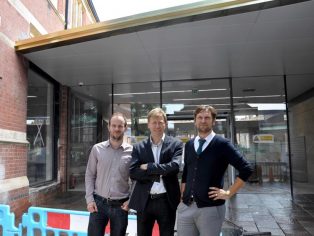 Director, Paul East on the site of the King Richard III Visitor Centre. Picture Will Johnson