Magnusson Architecture + Planning (MAP) recently announced the ground-breaking for the expansive redevelopment of what is now the Flatbush Caton Market in Brooklyn. The project, called Caton Flats, will invigorate the predominantly Caribbean American neighborhood with improved facilities for local vendors. Designed by Freeform + Deform, with MAP as the Architect of Record and Lettire Construction Corp. as the General Contractor, the new development willnot only enlarge the Flatbush Caton Market with over 16,000 square feet of retail space on the ground floor, but will also add 255 new units of much needed affordable housing (studios, one, two and three-bedrooms). An additional 10,000 square feet will be designated for retail space, a shared commercial kitchen for use by start-up food businesses, and flexible community space.

Situated on the corner of Caton and Flatbush Avenues, Caton Flats will provide another 10,000 square feet on the second floor for the new permanent headquarters of The Caribbean American Chamber of Commerce and Industry (CACCI). CACCI supports and promotes small business development, trade, and investment opportunities between the United States and the Caribbean.

Caton Flats brings together the efforts of MAP, Freeform+Deform, BRP Companies, CACCI, Urbane Development, New York City Economic Development Corporation (NYCEDC), NYC Department of Housing Preservation and Development (HPD), and NYC Housing Development Corporation (HDC). The goal is that the redevelopment of this well-known 20-year-old market will preserve the local Caribbean culture and economy amidst the spread of gentrification in Brooklyn.

While construction is underway, the Market has a temporary home at 2184 Clarendon Road in Flatbush. Caton Flats is slated for completion by 2021 at which point the market will resume operations in its new-and-improved location. 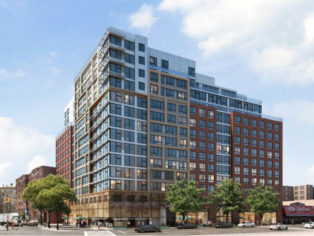