Make Architects, an award-winning international architecture practice, was commissioned by Wanda Group to design the unique facade for the premium Wanda Reign Hotel in Wuhan, China. The design of the luxury hotel facade is characterised by a compilation of 902 hexagonal modules which create the effect of multiple windows as ‘eyes’ looking out over the city from the guest rooms.

Each hexagonal module is composed of highly reflective aluminium and angled in both plan and section to protect the rooms from solar gain and create a dynamic texture on the surface of the building. Insulated silver aluminium cladding panels are arranged between the modules and LED lighting is integrated into each hexagon, adding the dramatic texture effect of the building at night. Located beside a river, the changing skyline adds vibrant colours to the exterior of the hotel over the reflective hexagonal modules.

“Wuhan, which is sometimes referred to as the “Chicago of China,” is the most populous city in central China and a major transportation hub made up of a mixture of modern and traditional Chinese architecture. The project has given us an exciting opportunity to create a glamorous building for the city. We were inspired by the nearby theatre design and wanted to create a visual contrast between the two structures by introducing an angular and sleek facade design that offers a visual counterpoint in that area. The façade design is also a response to the particular climate of the city.”

The geometrical pattern that adorns the hotel’s exterior supports an ‘alternate’ design at the base and top of the tower, where the proportions of the cladding modules begin to subtly change. At the podium level, large folded triangular glass panels create a dramatic three-dimensional effect and maximise the glazed frontage to the restaurants and conference rooms housed on the lower floors. The modules become vertically elongated to form the points of a ‘crown’ that surrounds the roof.

The Wanda Reign Hotel facade design was completed in December 2013 and the hotel opened in 2014. 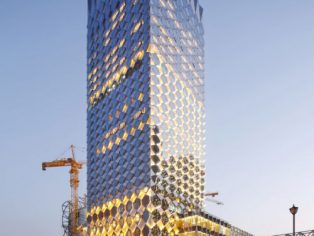 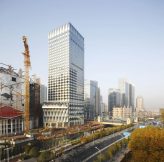